Creating dolls. Yeah, is it a doll?

The moment when a thing with the vitality transforms

Zizz is one of the characters from Pop'n Music 7.

不思議な術を使う幽霊紳士。趣味で作る人形は…まるで生きているみたいにそっくり！ 最近は興味深いモチーフを見つけてご機嫌らしいよ。
A phantom gentleman who practices mysterious magic. The dolls he makes for a hobby are… no doubt alive! His latest has an interesting motif, and he found it to be pleasant."

Zizz is the creator and puppeteer of Mebae and has created many other puppets as well, including four smaller dolls as an imitation of his own self, which can be seen in his Pop'n 9 FEVER! animation. He can also create illusions and false puppets of himself, as seen in his losing animations.

Zizz's appearance is a pale green-skinned man with empty black eyes. His garment is an all-black suit, consisting of a long-sleeve coat, pants, and shoes. Zizz dons a black beret with a large red frilled ornament, a cape that fades to a purplish color, and a large, yellow bow tie. He hides his face with a half-divided mask, and frequently creates an eerie smile.

Zizz's 2P color palette has his attire entirely white, except for his pants and shoes, while the eye of his phantom mask is red and the rest of the sections are blue.

Zizz's new attire is identical to his debut, but the bow tie and cape are absent and his hat is squared. Instead, it has a white frilled bow, yellow sleeve highlights, and yellow buttons.

His 2P color palette recycles the identical color scheme as his debut in Pop'n 7, but with a black color of his mask, red lips, and a light chartreuse color for his frilled bow.

Zizz's attire is altered to be slightly fancier, such as a black, crescent-shaped hat with goldenrod laces, a black vest with a waist belt, a white shirt underneath, and a black cape that is tied with a powder-blue-colored button. The original color palette also shown in 終末の序曲 ～オワリノハジマリ～, in Pop'n Music Lapistoria.

The 2P color scheme for Pop'n 9 recycles, except a dark blue color is located in Zizz's bow and the sections of his hat, waist belt, and scepter are pale yellow.

In Pop'n Music 20 fantasia, Zizz appears in ALT 2.0's animations, as she has fallen victim to his computer takeover scheme. He is mentioned in Alt's accompying song DOES NOT COMPUTE where she describes him as a "masked gentleman".

Pop'n Music 9:
ポップンパーティはヴェネチアの仮面舞踏会以上に おもしろいと２度目の招待にご満悦みたい。
The Pop'n Party is more interesting than a Venician masquerade ball and his eyes beheld an invitation that brought him much joy.


Pop'n Music 15 ADVENTURE:
幽霊紳士・ジズのお屋敷では、不気味な笑い声と共に コレクションされた人形たちの舞踏会が夜な夜な開かれているらしいよ。
In his mansion which is a ghost gentleman, a dance of collected dolls seems to be held. 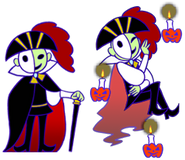 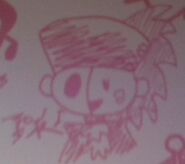 Doodle of Zizz on an illustration book