Zirkfied is one of the characters from Pop'n Music Sunny Park.

宇宙空間に新たな敵、現る！
立ち向う先に見えるのは撃破の祝杯か、漆黒のレクイエムか…
New enemies in space, it appears!
I stand for a toast to the defeated on the opposing side, or the jet-black requiem...

Zirkfied is a pale skinned man with bright green hair and eyes. He wears a tight gray suit with a white collar, black boots, and six black, wing-like attachments on the back. His helmet is gray with purple spikes with opaque glass covering half of his face. His entire outfit is highlighted in purple. He wields a white and purple spear. His original palette is later recycled in ZEPHYRANTHES from Pop'n Music éclale.

His 2P palette gives him pink hair and eyes. The gray parts of his outfit remain the same, while all the black and purple parts become white and light green. The glass on his helmet is light blue, and his spear is bright pink and blue. 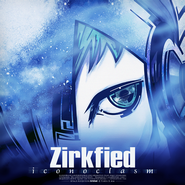