Courtesy, orthography, those who face each other in archery with a heart

Yuzuru is one of the characters from Pop'n Music Lapistoria. He is a main, unlockable character in Hiumi's story, The Virtuoso of the Blue Bow (蒼き弓の名手, Aoki yumiya no meishu?), and wields a blue, diamond-shaped lapis.

弓道場に抜ける春嵐のごとく乙女達の心を焦がす、
学園が誇る弓道部のエースといえば…
As of the spring storm passing in the archery field, he sears the girls' hearts,
speaking of the archery-unit ace that the school is proud of ...

The tranquil and handsome archer, Yuzuru, is an attractive target of schoolgirls, and they won't stop squealing and flirting at his intelligent archery abilities.

Yuzuru is a fair-skinned man with a sky-blue hue for his eyes and long, dark periwinkle hair that is styled in a ponytail with a white arrow accessory. Yuzuru is respectively known to be a Kyūdō expert, donning a traditional uniform that consists of a violet top with a light cyan part on his left arm and a brown jug-like shoulder part. He wears a brown yugake on his right hand, and a dark pale blue kilt on the bottom. Yuzuru wields a "yumiya" as his signature item. When he is riding on a horse, his extra accessory is a Retsuden-themed hat that matches his highlights.

Yuzuru's 2P gives him medium brown hair and violet eyes. His top is maroon while his pants gain a deep brown color. His bow is wrapped in light blue cloth.

Yuzuru creates a cameo on Roku's FEVER! Win animation, along with San and Ryuta.

Yuzuru makes a cameo in Ranma's FEVER WIN animation, where she is watching him practice, while he is blushing at her. Ranma doesn't even react flirtatious though. 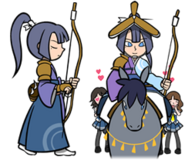