Walking and cleaning in the sewers

Food on the ground

Yummy is one of the characters from Pop'n Music 19 TUNE STREET.

地下でいろなものを集めて結構快適に暮らしてるよ。
でもちょっと地上にあこがれてるみたい？
It's living rather comfortably cooped up in the sewers.
But it kind of looks like it wants to be on land?

A sea monster that ended up underground, and disguised itself as a cleaning staff for a sewage treatment facility so it can eat the leftover food in the sewers. Slimeballs rest on the pipe it uses to get things out from the ground. Although it hates sunlight, it's curious about land.

A monster with a crude cleaning staff motif, most of Yummy's face is hidden behind a gas mask, barring its eyes peering out. It wears a manhole lid as a hat. Yummy dons a long red raincoat with purple fringes, yellow gloves, grey pants and purple boots. It keeps a broken-off pipe with slime-like organisms sitting on it. 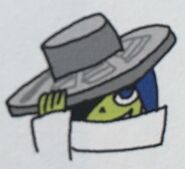