Peak of the gods

Love, the gods, the fertility of the Earth

Yima is one of the CS characters from Pop'n Music 10.

神々へ踊りで祈りを捧げる孤高の踊り手。
人々のため愛の祈りを毎日捧げているんだって。
A lonely dancer dedicated to giving prayers to the gods via dance.
He gives prayer of the love to people every day.[1]

Yima is a strange character. He speaks in a language that appears in shapes (or may be dancing to communicate) Not much else is known about him other than that.

Yima has black skin and blond hair. He wears a black helmet of some sort with five pieces colored with a blue and black gradient. He wears a blue scarf, three ringed, gold bracelets on each wrist and a pair of blue and orange striped pants. Yima is barefoot as most contemporary dancers are. His original appearance is used again in Greening from Pop'n Music portable and サケビノミドリ from éclale.

In his 2P his skin is deep red, and his hair and eye color remain the same. The pieces on his head are colored yellow and red. His wristbands are gold while his scarf is lime colored and his pants gain blue and green stripes.

Yima's skin tone is now changed to white, and his eyes are brown. His attire is identical to his debut, though his pants are colored dark brown and golden yellow, and his scarf is green with yellow wristbands. The five pieces on his head are colored in a gray and gold gradient. This palette is used again in Pop'n Music Sunny Park for Contemporary Nation 6 and Scars of FAUNA from Pop'n Music Lapistoria.

Yima's 2P coloring returns his original skin tone, and his hair is a slightly darker blond with bright purple eyes. His scarf is a similar shade of purple and his pants are white and green striped.

Yima appears once again with black skin and blond hair, and his eyes remain brown. He dons plain white pants with a cream colored scarf and watching wristbands. The decorations on his helmet are colored gold and black.

His 2P gives him white skin much like his Pop'n Music 11 appearance, and his eyes are red with teal colored hair. His scarf, wristbands, and the belt of his pants are black, and his pants are a light mint color, matching his helmet.

Pop'n Music 11:[2]
遥かな時を経てイマは旅立つ。
神への思いと愛を今胸に秘めて。
その瞳が見据えるものは遠く彼方…。
Yima has finally departed after a long time.
Hiding his thoughts and love for the gods in his chest.
Those eyes that gaze at a place in the distance...

Pop'n Music 16 PARTY♪:[3]
その音色は夢色。愛を求め、旅は続く・・・
The tone is the color of dreams. He continues his trip in search of love...

Pop'n Music portable:[4]
人々の営みにより荒廃した大地
神より遣わされた使命を果たすため
豊饒の大地へ回帰の祈りを
今、捧げる…！
The Earth was devastated by the people's activities.
To fulfill the mission sent by the gods,
he now dedicates himself to praying for
fertility to return to the land...!

Pop'n Music éclale:[5]
その踊りは輝きを宿し、魂を呼び覚ます。
この世界に再び芽吹くであろう命のために…
That dance has a radiance that awakens the spirit.
For the life that would bud in this world once again...

Yima does not say these, he forms the symbols with his dance.

These are taken from the Pop'n Music 10 site. All of his dance poses symbolize something.

The Buddhist manji, a symbol for peace

Yima in the Pop'n Walker event

The sketch for Echoes 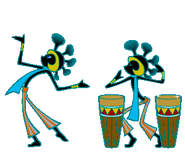 Doodle of Yima on one of the character illustration books

Yima on the Nekomata Master card

Community content is available under CC-BY-SA unless otherwise noted.
Advertisement