Village festival dance. Everyone around starts spinning, spinning..... in circles~

Bad witch. She is always being mean!

Yard the 6th is one of the characters from Pop'n Music 6.

ヤード家に代々伝わるやや不思議なバクパイプ。その６代目吹き手になるためにちっこい体で広い広い世界を修行中！ でも道行く先々で悪い魔女にじゃまされて大変なんだって。あ、バグパイプがチキンになっちゃった！
The wonderful bagpipe rather tells from generation to generation to Yard. During training in the wide, wide world, body to become a hand-blown 6 generation! But, he was disturbed by a giant change by an evil witch, wherever he walks down the road. Oh, the bagpipe became a chicken!

Yard the 6th is a black anteater, wearing a black, tall hat with a lime-to-cerulean feather. He also wears a traditional Scottish attire, consisting of a red-long-sleeved shirt with yellow highlights, a dark velvet red vest, a plaid kilt with olive accents, and white stockings and black flats. Yard wields an orange bagpipe with a pink patch.

Yard the 6th's name was a reference to Pop'n Music 6. 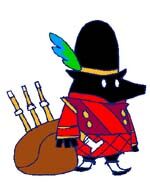 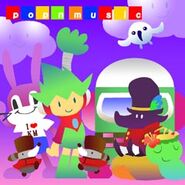