Exchanging sake with the people in the village

Yamabuki is one of the characters from Pop'n Music 18 Sengoku Retsuden.

山吹の横笛の高い音は、神々を呼び、人が持つ邪神を払う。
山では動物たちの為に、村では人の為に、狐は今日も横笛を吹く。
Yamabuki plays a high flute tone, it calls the gods, though evil men must pay.
For the animals, for the people, the fox plays the flute today for the village in the mountains.

Yamabuki is described as a benevolent fox, who is kind to the people in the village nearby and willing to play his flute for them. He doesn't like those who are greedy or evil-spirited, and makes them pay to hear his music. But, Yamabuki is not a very good parent. As seen in his LOSE animation, tantrum throwing kids are next to him. One of the kids are pulling his hair, Yamabuki seems embarrassed and not pleased about this...

Yamabuki takes the form of an anthropomorphic fox covered completely in moccasin-colored fur. There are dark shades of brown on his ears, and he has simple black eyes. the bottom of Yamabuki's hair is tied into a brown ponytail, matching his ears. His attire includes a long-sleeved light orange and yellow top, with dark orange trim and fur on the shoulders, a pair of white pants with a black cover on the top, and a pair of dirty-brown old-fashioned boots. Yamabuki carries an ancient flute with him.

Yamabuki's 2P palette gives him icy blue fur and bright red eyes, and also switches the orange coloring on his clothing to forest green. The fur on his shoulders becomes white and his flute is mahogany.

In the Pop'n Music Sunny Park Card Collection, Yamabuki's hair is tied in a long ponytail with a black scrunchie, and his garments are similar to his debut appearance, but more summer-like. He wears a short sleeved white kimono with yellow trim on the sleeves and it's tied with a light orange, yellow, and dark orange sash. He wears simple dark brown shoes and carries a blue gradient fan with a purple ribbon.

Yamabuki (山吹, Yamabuki?)-Yama (山, Yama?) translates to mountain, as it implies that Yamabuki is located at the mountain in his FEVER! animation. Then, buki (吹, buki?) is translated as blow, breathe, or puff, which symbolizes Yamabuki's piccolo. Yamabuki is combined as "breathing mountain"; it also refers to a kind of yellow flower known as the Japanese Kerria (Kerria japonica).

2P palette
Add a photo to this gallery 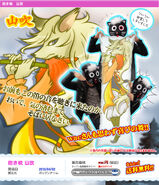