Wu Sheng is one of the CS characters from Pop'n Music 13 CARNIVAL.


An Asian star who is slowly climbing into the rock world.
His favorite phrase is "I am the most wonderful!".

It's his goal to devote the hottest stage in the world to the listener, to continue singing day and night.

Wu Sheng is a famous Peking opera performer who makes Chinese-influenced rock. He is a passionate and energetic young man who wants to express it in a song, though he seems shy at times.

This character's concept is "Chinese-style."
As I listened to the song many times, I made a lot of rough images, but one exceptional and conspicuous among them, it was decided to introduce this "he came in a Peking opera-style costume" to everyone.
He is a young, passionate, fiery guy trying to express it in song.

The production process of the animation was also very fun!
I walked down the aisle in the behavior of the animation to do it myself first, but because my colleagues weren't aware, they saw my pose and had a very subtle smile. They were surely thinking "what strange movements..." in their minds. (laughs)

The "wusheng" on stage is a little frantic, taking away from the Peking opera's original quiet and solemn atmosphere, but please give forgiveness!
Once someone falls into the "Love River" they're prone to getting excited, and above all on the stage to sing a song with so much to do! (laughs)

Hello everyone! It's Tantan.
When I first got a demo of this song, I thought "the melody is great."
It contains Chinese instruments such as the erhu and pipa in the song, giving a very Chinese flavor to rock!
I was surprised how smoothly the old Chinese atmosphere was blending into the modern rock.

While you're listening, images of the wusheng come to mind, accelerating smoothly and making a picture from there. He is among them (laughs)
In addition to Wu Sheng-kun, we had a lot of fun making another character, I will introduce them to you if there's a chance someday!

It turns out Wu Sheng-kun is very passionate with an energetic personality, just looking at his bombastic behavior.
But it goes away, and occasionally there is also a surprisingly shy face!? (laughs)

Giving life to Wu Sheng-kun, he begins moving vividly in his activities out of nothing.
Such a moment is the most fun.

He has black hair and eyes, red makeup streaks on his face and wears a Peking opera-style costume with flags decorated with card suits. Wu Sheng's casual wear depicts a yellow and green plaid shirt and black pants. 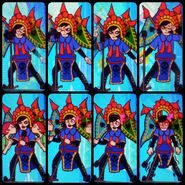 An image from the Pop'n Music 17 THE MOVIE site.