Wolfgang is one of the characters from Pop'n Music Lapistoria. He is a main, unlockable character from Miyu's story, The Wolf and the Girl (オオカミと少女, Ookami to shoujo?), and wields a blue, diamond-shaped lapis.

夜深く沈む森の地にあらゆるいのちがひれ伏した、
黒き者達のうたが響き渡る
All life was prostrated in the land of the deep forest at night,
the black creatures' songs are resounding

Wolfgang is a large, anthropomorphic wolf, living in a far off deep forest. Sometimes, he can be easily flustered, but doesn't want to be laughed at. He also seems to be a friend of Harpya, who is another being from the same forest.

Wolfgang is shown as a large, dark gray wolf with dark blue eyes and lighter blue irises. He has light blue-gray hair with bangs in the middle and tied into a lengthy ponytail extending into a lighter shade, as well as a white tuft of fur around his neck accessorized with yellow feathers. His outfit consists of a black poncho with gray lining worn over a black, blue, and yellow robe, a blue scarf draped around his head with yellow ends, and blue wristbands and blue bandages around his legs. He also carries a gold staff with a blue design.

Wolfgang's 2P makes him all white, and his eyes are now light yellow, while his irises are black. His hair becomes a normal gray, with the end of his ponytail ending in a cream color. The fur around his neck is light yellow, and the feathers keep their color. His poncho is also kept black while gaining a light yellow lining, and the blue parts of his outfit become dark red. In this palette Wolfgang carries a red diamond lapis.

Wolfgang's change card appearance presents him with new attire, consisting of a large blue, yellow, and orange headband tying his hair back, while the white fur around his neck is tied into two separate parts. He has a gray and blue scarf draped around his shoulders, and wears black pants with a blue and gray cloth tied around his midsection, with an orange belt and blue-gold accessories resembling his staff.

Neutral (2P)
Add a photo to this gallery 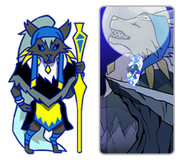 Wolfgang in Lapistoria
Add a photo to this gallery