Wilhelm is one of the characters from Pop'n Music 14 FEVER!.

Wilhelm is portrayed as a tall man wearing an old style black suit. He wears a long sleeved black top with a beige frilled top underneath that's adorned with a yellow cravat underneath a gray bow tie. He also has white gloves and a blue gem necklace. His black pants are worn loose and fitted at the ankles with brown dress shoes. His attire is usually covered by a long black cape that red on the inside with a yellow cross on the back, with a tattered beige look to the ends of it. His face is obscured by a beige skull-like mask with horns and teeth and a "ü" in the middle, while his eyes glow yellow through it. Once his helmet is removed, he's revealed to have pale skin with bright red eyes and deep magenta hair. Two red lines run down his eyes, similar to Jack's. His original palette is used in Electro Baroque in Pop'n Music Sunny Park.

In his 2P palette, his suit becomes a sepia tone, while his cape color is inverted. His cravat, gloves, and cross on his cape become orange. His helmet is two separate colors, with the top being black and the jaw remaining beige. His eyes remain red while his hair is shifted to a drab olive color.

His clothing in the change card series shows him with his mask up, wearing a beige shirt and yellow cravat. He wears a gray apron with his attire, with a red "ü" embroidered on.

魔界のお庭も花が咲き始めました。
さっすが～めずらしいものばかりだね！
向こうのおじさんもびっくりしてるよ？
The demon holding the garden, and the flowers have begun to bloom.
Impressive ~ It's just something rare!
And surprised on the other side is an old man?

Wilhelm is an old German name and a contraction of Willahelm, meaning "will, desire" and "helm, protection." The "helm" refers to Wilhelm's mask. 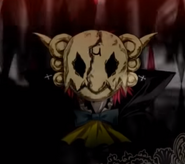 Wilhelm with Jack on the Pop'n Music 19 TUNE STREET card "Superior with Subordinate."

A depiction of the HELL 14 expert course (top right).

Wilhelm's appearance in Beatmania IIDX 19 Lincle as an enemy, alongside "Mr. Pumpkin" and "Blue Dragon."

Wilhelm with Jack and Gerhard on the Pop'n Music éclale card "I Wanted to Run Away from the Worship."