Wild is one of the characters from Pop'n Music 17 THE MOVIE.

サングラスの下に冷たい瞳を宿した奴の名は…今年公開のサイボークポリスメンMOVIE、前売り券好評発売中！
With cold eyes hidden behind his sunglasses, his name is... a cyber policemen MOVIE releasing to the public this year, advance tickets are on sale![1]

After an animal turned into a fighter, robo-tank modifications, as well as some complications in the idea of a racing car stage, 96 recommended that he be a strict Hollywood action star.
There are surprisingly little strict Pop'n characters(?),
Unchanging expression, wearing a black tank top every day, non-fluttering hair and mind...
We hope with peace in mind that Poppers want a cool character.

Wild is an android that takes the form of a suntanned, bulky American man with a blonde crew cut. His robotic arms are open and are similar to the designs from the Terminator franchise. He dons sunglasses, a dark gray tank top with matching leather shoes, a black chipped leather jacket with matching pants, a belt and a metallic cover on one side of his head. He is often seen riding a motorcycle and his expression rarely changes. In his Dance animation his metal form is revealed, along with a portrait view in his FEVER! Win animation.

Wild's 2P recoloring gives him blue hair, a light complexion, and cerulean skeleton. His sunglasses are yellow, his shirt is gray, and his entire attire red.

From the AC16-17 character book 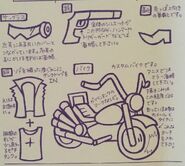