The city with a big sky

Wakaba is one of the characters from Pop'n Music 10.

たまにちょっぴり大人びたことを言う小学生のおとこのこ。
ちかごろ窓の外を見てはため息をついてばかり。どうしたのかな？
An elementary school boy who is sometimes a bit precocious.
Lately he just looks out the window and sighs. Wonder what's wrong?

Wakaba is the son of a multi-millionaire, and has a hobby for writing and illustrating.

Wakaba is a boy with simple black eyes and short hair. He dons a long sleeved black and white striped T-shirt with a matching white cap. He also wears brown shoes with a navy blue pattern, white shoelaces and black socks, as well as beige capris. He carries a red tote bag.

Wakaba's 2P color palette re-colors his hair into a dark gold color, and his eyes teal. His hat is colored into a navy blue, and his capris are velvet. Wakaba's striped capris is gray with a dark turquoise color, and his shoes are light auburn. with black and dirty brown sections.

Wakaba's name can be written as 若葉, and it translates to "young leaf". 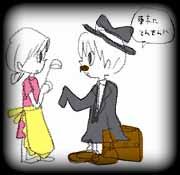