Waka-san is one of the characters from Pop'n Music 12 Iroha and the third member of the Miracle 4.

京の都に五条に吹く風は、今サイバーになりにけり。
ちょっぴりサイバー仕様で再登場！！！
The wind that blows from Gojo to the capital city is now becoming cyber.
I appear once again with some slight cyber methods!!!

Waka-san is the third and youngest member of the Miracle 4, appearing to be calm and collected.

Waka-san is a fair-skinned man with simple black eyes. He has short navy blue hair with two parts tied into a bow in the back. Waka-san's attire is a white sleeved shirt with large blue sections on the end of each sleeve. His wide, baggy pants are a similar blue and he wears metal geta on his feet, shown to be rockets. He is sometimes seen wearing a long, white veil.

Waka-san's 2P palette gives him yellow hair, blue eyes, and tan skin. His top becomes red-orange, and his pants and the ends of his sleeves are mahogany. His veil is tinted pink.

His debut in Pop'n Music 8 is near identical to his current appearance, although he wears regular geta as opposed to metal ones.

Waka-san has a small cameo in the Pop'n Xmas animation from Pop'n Xmas 2004 ~Tenshi Noutagoe~. He wears his debut attire, and his flute is shown blowing glitter.

In Uno's Dance and Win animations, Waka-san's attire is strikingly similar to his individual debut.

However in Uno's 2P color palette, Waka-san's eyes are dark orange and his hair is colored brown instead of black, and the rest of his attire is colored turquoise and purple.

Waka-san makes a cameo in Force's Win and Dance animations from Pop'n Music 17 THE MOVIE. His attire remains the same style, but the colors of his top are inverted. His sleeves are blue with white trim, and his shoes lose their metal appearance once again. His veil has a slight pink hue to it.

In Force's 2P Dance animation, Waka-san's attire becomes all purple, and his geta are white, while his veil has a pink hue. He gains darker skin and yellow hair. In Force's Win animation, he returns to his original 2P palette from Pop'n Music 12 Iroha.

Waka (若, Waka?)-The term is translated as "young", referring to him being the youngest member. It is also translated to "Japanese poem" and was similar to the "haiku", following the 5-7-5 pattern.

"-san", is a polite Japanese affix, and is also Japanese for three, representing he is the third character of the Miracle 4. Not to be confused of San, a part of the Magical 4.

Waka-san's name may also be a reference to Minamoto no Yoshitsune, a general from the late Heian period referred to as Ushiwakamaru (牛若丸) in his childhood who defeated Benkei in a duel, and later became his ally (explaining why he makes a cameo with Ben-K in THE MOVIE). 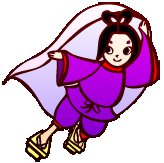 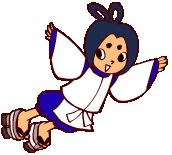 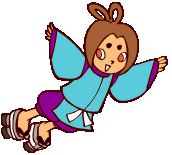