Vela is one of the characters from Pop'n Music éclale and is a crossover character from BEMANI's SOUND VOLTEX franchise.

A blind, cynical space pianist who lives at the world's boundaries and misleads travelers with his songs. He is described to be a distrusted criminal who targets do-gooders. Vela's arch-nemesis and brighter counterpart is Nova who frequently appears in his animations.

Hello everyone, we thought you would like this, it's Vela, who was invited from the sky's limits.

The countless requests we received from everyone had immediately ran a VOLTEX direction.
They had a crude-looking impression, saying "this person please" without giving me the name,
They told me to wrap the gift in a lovely setting. I pictured a world of kindness. Thanks to everyone at VOLTEX!
When the delivery unfolded in Pop'n, Nova in the Southern Cross rivaled the amazing deathblow pose, possibly thinking "coming of the False Cross song" and heard it approach from the direction of sound, and wondering "a port?" about the new song! It's amazing!

This time we're using "praying for application" → "voting" because it made an unusual sense of urgency, receiving potential, and individual fantasies caused by the jacket hoping to be fulfilled in Pop'n, and could all be crammed into a single notification.

In terms of animation, once you've selected Vela on the selection screen, and made the chosen song "Southern Cross," doing the confronting character animation has become a recommended course in that case.
Additionally, when you've received Stage Failed, Nova passes straightly on the scene, with a kind glance as he passes by! It's essential for advanced users around here.

There is an urgent conversation among the star manufacturers that you mustn't miss, to be specific, everyone who has voted, don't forget you guys because it is required confirmation〜

Vela has long lavender hair tied in a ponytail, black gloves, a dark purple short-sleeved coat with a tasseled cutaway, white tuxedo shirt with a waistcloth tied together with rank cords, a crinoline-esque garment, dark purple pants and shoes, and a blindfold.

"I don't care. The tricked ones are to blame."

Console = A pianist and nemesis of the South living at the end of the sky, not far from the world's boundaries.
His music picked up by the Gravitational Radar echoed brilliantly all over the universe to mislead travelers.
Unapologetic cynic.
He's attached to a certain similar prestigious space musician.
He's an above-ground resident denounced as a liar that didn't care about behaving properly,
And he is deeply fixated against people with genuine motivations.
Although he's blind, his ears are pretty good, and anyone sightseeing will escape from the vicinity of his home.
He'd be willing to give you the way back... he might be.

Vela's name is derived from the Vela constellation, which is part of a group called the False Cross, which is the title of the SOUND VOLTEX song Vela originates from. 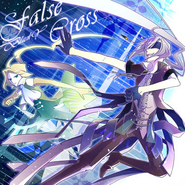 Vela and Nova on the False Cross jacket 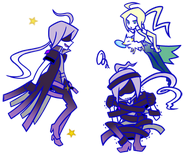