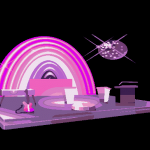 Here are the 3 characters by the way.

Changes of Asian PM2 from Japanese PM2 and Asian PM1

~A region notice has been added (not present in Asian PM1)

~All westernizations from the Asian PM1 were retained except for "Enter your name." which was changed to "Entry your name."

~"tsuu" in the title logo was romanized to "two". the katakana name was removed altogether

~the demo screen shows "Gather round!" "Party on to Pop'n Music!" "THE MORE PLAYERS THE MERRIER!"

~description of party mode is "What's gonna happen? It depends on Your luck!"

~The Ebisu Singers is now The Bostons

And now for the romanized song title and artist:

Love passes by by apresmidi (PM1)

ROSE~ Deepen your love by BROKE

Cherry & Raquel by The Bostons

And all asian version music comments so far:

MELLOW - A sweet song with a mellow feel.

RAP - Full points for this rap.

FANTASY - A melody from the land of make believe.

AFRICA - A beat with African heart!

LATIN - A passionate rhythm blown in on a warm Caribbean breeze.

DANCE - A dance track that everyone will love!

TECHNO POP - Bright and energetic techno for all!

SPY - A song to bring back all those spy movie memories.

The song from the first pop'n music game "I REALLY WANT TO HURT YOU (Theme: POPS)", with "Perfect bokura wa~" as the starting phrase adopted in the commercial of the CS version of pop'n music, and has been the song considered to be the face of pop'n, was based on an original song, and the recorded version in pop'n was an arrangement of the original song with lyrics. The original song had been used on the key chain prize machine called "Ugoke! Purimucho!". What kind of game machine really is this "Ugoke! Purimucho!"? The details from the following.

According to the KONAMI press release, which was published December 9, 1997, "Ugoke! Purimucho!" started running that late December of the same year. By taking two different poses, the object of the game is to create a key chain with an image that appears to move when viewed in different angles. It was found that the "original song" can be heard in the background during the photoshoot, and was also the background music during demonstration. Although I can't find an operational machine of it, I'd like to do one play and listen. Also, in 1998, a [Yomiuri] Giants version of Ugoke! Purimucho! was released. In this version, character frames with Giabbit-kun and the Giants logo were provided.

Mary: This time, the Popper as requested a lot from all the fans, Donna!

Judy: And also supported by the core fans, the appearance of powerful Dami-yan!

Dami-yan: Hi, gentlemen! Are you fine?

Aya: -you were not supposed to answer there.

Donna: I mean, when Dami-yan-sama takes the effort to call, it's not rude not to answer to his call.

Judy: Donna is really a huge fan of Dami-yan, don't you think? I'll start the question right away. "What do you like about Dami-yan?" There's really a lot of questions.

Donna: There's no reason! I lose my mind in the soul put in the song.

Dami-yan: When my soul is felt, it's very likely to be with a young girl.

Mary: That's nice, Donna. So, next question. "How old are you?" This question was from many men in the runaway.

Aya: "What are the occupation of your parents?"

Donna: My Papa is a trading merchant. My Mama is a cellist in Austria's top orchestra. She also teaches at the University of Music during the day. Both of them are busy all year round, the house is open.

Donna: No it's not! I... am not myself, because we're together always.

Dami-yan: As usual, my manner of talking is good?

(Translation to be continued. What's Jiiya?)

Nothing else to see here, thank you!

My favorite characters are Sanae-chan, Sholl Kee, and Hiroshi Jingu. btw did you know that Sanae was named "Jacqui" in the American version of pop'n music? And Sholl Kee is "Ken"?

I was also obsessed with PARQUETS. I have listened to pop'n music artist collection - Parquets, hummingbird, parquet circle, and parabola.

I was also obsessed with dormir as well. I also admire TOMOSUKE for his versatile musical genius. When I was a kid, I had no idea that the majority of the songs I play on various BEMANI games were his. I only knew he composed What is Love? on beatmania 7thMIX...

What do I contribute you might ask? Well... mostly screenshots of characters from the PS1 games and the djmain trilogy of arcade versions (PM1-3), and if I discover something new about these old versions that nobody seems to know, I post them right away. I also like to translate information when I have the time, but I have barely any knowledge about the Japanese language and sometimes I need OJ Tsuyoshi's help, or from the Philippine Pop'n Music Players Group (yes, there exists one).

I decided to make a gallery for miscellaneous screenshots which I cannot add into the pages themselves, or I don't know which page to put into.

The enemy robot faces the wrath of the Great Sword

UNCLE JAM hits his head on the side of the frame and his nose bleeds. All with OLIVIA in shock.

another image of reo from PM2

I don't want an invite please

I would dream about tweeting on the eggshell

(And was cracked and black ground hex reliquary before you found)

It seems, everyone is always seemingly broken naive mind

It's okay to cry after failure

The show must go on

Mary: This time is gonna be the 10th Popper's Lounge!

Judy: Thanks to all the fans who keep sending us questions every time.

Aya: WHOA!!! I won't listen to you until you take away your make up!

Mary: Well well, Aya calm down. His name's absolutely a secret for work reasons. For now, let Bamboo have the decision.

P-1: Aw, you're fighting? What a difficult situation.

P-1: Ha? What are you trying to say? Comedy show performer talk is also coming?

Judy: Yeah. Aren't you P-1 and P-2 gonna introduce yourselves?

P-1: We have gained a Japanese translation software made in Russia today. My partner normally talks like that.

Ice: I'm Ice. Thank you despite what happened earlier.

Aya: There had been a lot of fans sending us mail saying, "We want you to talk more!".

Judy: Well, first, Bamboo? Lemme ask you this question. "Why are you like Bamboo?"

Bamboo?: Since the size of my afro was funky after all. But now, girls are good. In fact, I'm a beautiful girl.

Bamboo? Won't you show the mail from 1000 people who wanted to see my real face? Hey, Aya-chan.

P-1: Ha? What are you trying to say? Comedy show performer talk is also coming? ...I can't hear you!! It would be a big deal after seeing the sponsor.

P-1: Do you know Russian things? In Russian cuisine we have "Pirozhki" which can be eaten for snacks. We're called "Pirozhki No. 1" and "Pirozhki No. 2". Oh, we were given the name pirozkhi because they're affordable, and to cut costs our dimensions were messed with during production.

Aya: Alright, "What power source do you run on?"

Judy: Next is Ice, nice to meet you. A lot of your fan calls are coming from girls, and also support from guys are very best. A lot of questions were also coming! And interesting that they're centralized much on the same question!

Ice: Is that so? But it could be any question. I'm nervous.

Judy: Ok, question. "How did you make a production with Timer?"

Ice: Originally I have my own musical work. I decided to provide music and also sing a song since I'm an acquaintance of Timer's and my sense is good.

Timer: Once you got this voice in the ears, anybody would listen.

Mary: Oh, Timer. Aren't you making a live appearance next to the studio?

(the translator taps out.)

POPS - Cute and lovely "shibuya-kei" pop song. (I REALLY WANT TO HURT YOU)

FANTASY - A melody from the land of fairytales. (monde des songe)

DANCE - A dance J-Pop number that everyone will love! (Hi-Tekno)

DISCO QUEEN - A cute song with a cutie-disco dance beat. (all i want)

TECHNO POP - Bright and energetic techno for everyone! (Electronic Fill)

SPY - A thrilling tune that is reminiscent of a spy movie. (SPICY PIECE)

CLASSIC - An arranged medley of classical songs that everyone will recognize. (Chaos Age)

MELLOW - A sweet song with a little ennui feeling. (Hikari no kisetsu)

POP RAP - Cool rap in this pop rhythm! (Smile The Night Away)

GIRLY - Positive love song for girls. (LOVE IS STRONG TO THE SKY)

HEAVY METAL - A storm of strong guitar sounds and shouts!! (I'm on Fire)

CANDY POP - A bright, fun, and energetic girls pop. Let's sing and remember the lyrics! (GIVE ME YOUR PAIN)

CLASSIC 2 - That classical music is back with a power up! Now hotter than ever! (R.C.)

AVANTGARDE - Where will the miracle beat and varying sensations come to you? (Bee's Eye)

SOUNDTRACK - Huge scale of orchestral sounds, like a theme of an epic sci-fi movie. (Uchuusen Q-Mex)

DANCEPOP - Western dance pop that will attract DDR fans. (Till the End of Time)

LOVELY - apresmidi's new song after a long time. Hear the duet by Sugi and Sana. (Hachigatsu no Sayonara)

ROCKABILLY - Female vocals in this cute rockabilly. Suitable for ponytails.

CLASSIC 3 - The third installment in the popular classic series! Now a bit elegant.

Retrieved from "https://popnmusic.fandom.com/wiki/User:03mrx?oldid=47635"
Community content is available under CC-BY-SA unless otherwise noted.