The sun setting over the sea

Uno is one of the characters of Pop'n Music 14 FEVER! and the first member of the Miracle 4.

ご存知アイドルグループ「ミラクル☆４」のリーダーは面倒見のよいおにーさん。
個性豊かなメンバーをまとめるのは暴れ牛をあしらうより骨が折れるってさ。
The leader of the idol group "Miracle☆4" is known as a caring brother.
He brings together the quirky members to deal with a rampaging bull and broken bones.

Uno is the leader of the Miracle 4, he seems to be a courageous matador.

Uno appears to have short and wavy hair with a simple orange color. Uno's attire is a black hat with yellow lining on his head, a traditional matador suit that's cerulean blue with yellow designs such as the brooches on Uno's hips, yellow belt, and gold spandex arm guards. He wears black shoes and long white socks. He has his red cape at all times, with a green circuit-like pattern on the underside.

In his 2P color palette, Uno's hair color shifted into a blond color, while his eyes are colored fuchsia. His entire outfit is colored magenta, and the yellow designs become slightly lighter. His cape is the same color as his eyes, and has a pink circuit pattern.

Although Uno retains his original appearance from Pop'n 8 and FEVER!, the color of his attire seems to be different. His hat, pants, and shoes are plain white, and his cape is colored orange. His hair is shaded into a brown color and he has a purple tie, unlike his debut. The band on his hat and the highlights of his outfit remain their respective colors though. This only occurs in Force's FEVER! Win animation from Pop'n Music 9.

Uno has a minor cameo in the Pop'n Xmas animation from Pop'n Xmas 2004 ~Tenshi Noutagoe~, wearing his original attire and holding a rose.

Uno makes a cameo in Force's Win and Dance animations once again in Pop'n Music 17 THE MOVIE. He is shown wearing a new outfit, consisting of white pants, blue boots with gold trim and a gold belt, and a white shirt underneath a blue coat with white cuffs and red shoulder pads with gold tassels. His hat remains the same. The attire only appears in Force's Dance animation. in Force's Win animation, he appears to be wearing his original attire once again, albeit with pure gold shoulder pads.

In Force's 2P palette, Uno gains new colors as well. In his Dance animation, Uno's skin tone darkens and his eyes are dark blue with yellow hair. His pants, shoulder pads, shirt, and gold trimming remains the same, but his boots and coat are black, and his hat is white. In his Win animation however, he returns to his original 2P colors see in Pop'n 14.

Uno is a Spanish term, meaning "one", related to being the first character of the Miracle 4. 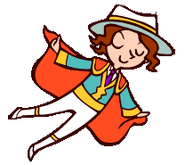 Uno in his Dance animation in Pop'n Music 14

2P Uno in his Dance animation