It's the same as Nia (p-M-Crew Promotion)

Jack in the Box

Toa, who is Nia's twin brother, is one of the characters from Pop'n Music Lapistoria. He is a main, unlockable character from Retsu's story, Battle in Disguise (変装大作戦, Hensou daisakusen?), and wields a green pear-shaped lapis. He first makes an appearance on the opening sequence, and was later introduced as a mysterious character on the official KONAMI site. On the update of August 13, 2014, the name "Toa" was given.

ハチャメチャな気分だって一瞬でチェンジ！
ボクのコーディネートでキミに新しい世界を見せてあげる♪
I can change into a crazy mood in an instant!
I'll show you a new world with my coordination♪

Toa is Nia's twin brother, who's noted to be a talented stylist, often sewing clothes for himself and his sister. He is also very friendly to people and likes making new friends, as shown where he first met Retsu and Rinka. He is shown to be very terrifying when he is angry, noted in his Miss animation as his example.

However, he and Nia become Jade's victims and act like his puppets, but they were reverted back to normal thanks to the Tsugidoka! gang, Mimi and Nyami.

When they were still children, after their parents were divorced, resulting themselves being separated, Nia made a promise to Toa as she said to him, "It's okay, Toa. You don't have to rely on me anymore. You must live independently and we will meet again in the future". Since then, he starts living independently. At first, it was difficult for him but he later gets used to it.

During his time in Junior High, Toa starting sewing his own clothes for Timer and his little sister, Minit's. She remembered about a new net idol who is famous since their debut. Her brother also mentioned about it who looks like him. Toa decided to look for information about this popular net idol, but he became surprised that this idol was revealed to be Nia, his long-lost sister. So, after finding and reuniting with her, he decides to take care of her by starting to work part-time in Fuga's family laundry.

Toa's appearance is strikingly identical to Nia, such as short, gray hair, albeit he possesses two "ahokes" on his hair, and carries a cyan color scheme everywhere on his eyes and on parts of his clothing. Toa's apparel is very feminine, which contains a gray tube top with a white layer above that connects to his white, puffy shorts. He dons gray sleeves and socks that are cut into triangles on the side of each thigh. He wears white boots with cyan soles, a white cape with cyan designs, a dark grey neck tie that has a cyan triangle, and headphones that carries the signature colors of his outfit. His original palette was recycled in Jack in the Box from Pop'n Music: Usagi to Neko to Shounen no Yume

Toa's 2P coloring gives him lavender colored hair and lime green eyes, as well as tan skin. His outfit becomes almost all white, although his cape becomes black. The cyan highlights of his outfit and headphones become lime green. In his 2P palette, he wields a purple pear-shaped lapis instead of green.

FEVER!
Add a photo to this gallery

Toa's information on the back.

Toa's Change card in the Pop'n Music Usaneko Card collection, including his information
Add a photo to this gallery 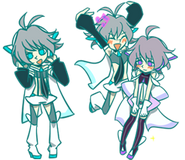