Cosplay? Designing and collecting costumes. My closet is like a department store!

Timer is one of the characters from Pop'n Music 2.

「生まれつきアイドル。てゆーか妖精?」な歌ってしゃべれるミュージシャン。
スケジュールがみっしりの売れっ子で、いつもおっきな時計を持ち歩いているんだ。
"A natural idol. Or as you'd say a fairy?" A musician who can speak any song.
Being so popular with a packed schedule, he always carries a large clock.[1]

Timer is a fashion designer, singer and model. He seems to interested in cosplay, preferring to order costumes rather than making them by himself.

He is shown to have a crush on Nyami; tailing around her and sometimes disguising himself as a cat (using a cat hoodie). But when she had a mutual feeling for him, it tends to be kept a secret on her part. He is Minit's's older brother.

Timer appears as a tall man with red eyes and short, hazel-colored hair. On Timer's head is a red-violet rabbit hat. His attire consists of a suit with the same color as his hat, a violet tie with a rabbit icon, and black shoes.

Timer's 2P color palette changes his hair color to powder blue color and his eyes to a deeper red. His whole suit is colored white, and his shoes are colored cerulean with black soles. His neck tie also is shifted to red.

Timer wears an all red attire, including a short tank top, red khaki pants, and black sneakers with red outlines and rabbit icons on the back. His hair color is shaded into brown instead of hazel. His original palette in pop'n 6 is used again in ACCELERATION from Pop'n Music éclale.

In his éclale appearance, Timer's hat has its left ear tainted by a light cyan area, and wears a gray top hat. His costume is a pure white top with gray sleeves and left section, white gloves, and red sections located on his pendant with light yellow sections, and opposite sections. He also wears gray shorts with white accents, and red boots. His FEVER! animation gives him two cross-dressing attires: the costume from Pop'n 2's FEVER! animation, but it has two red pieces and gray straps. The other has a red visor with a light baby blue bow with a yellow sphere ornament, as well as a white top with a large, red highlight. His Win animation has once again uses the cat hat. This time, he wears a red, fancy suit with a light red bow tie and white gloves. His shorts are platinum with striped socks and grayish white shoes.

Timer's 2P has purple eyes and golden hair. His costume is black with yellow highlights on his shirt, white top hat and pants. His FEVER animation gives him his waitress outfit in dark gold, while his other attire has sky blue ears and matching shirt with light pale orange, white and light yellow accents.

Timer appears in the Pop'n Music Card Collection on a change card. He wears his usual rabbit hat in a white color, a white T-shirt with a gray plaid tie, red wristbands, blacks shorts, and white boots with red soles.

Timer has a cameo in Ice's Lose animation in Pop'n Music 3, unchanged.

In Pop'n Music 4, Timer wears fancy garments, consisting of a deep red top, a white neck tie, and dark gray pants with black shoes. His eyes are colored brown instead of red. Timer only appears in Ice's FEVER! and Win animations.

Timer makes a major cameo in one of the videos in the Omake section of Pop'n Music 7, along with Ash as well.

His new appearance in Pop'n Music 13 CARNIVAL shows him wearing a harlequin-inspired costume, with his entire outfit is split into halves that includes red and burgundy colors, while the top has checkered patterns. This only occurs in Ice's Jam and Win animations.

Timer's new and casual attire includes a lime green sweater with a white shirt underneath, jean-colored capris, and red-white boots. This only appears in Minit's' Lose and Win animations in Pop'n Music 14 FEVER!.

Pop'n Music 6:[2]
トップアイドルとして今日も走りつづけるタイマーくん。全国ドームツアーも大成功！
コンサートはファンのみんぽと一緒に歌えるから大好きほんだって。
「みんなもぼくとLet's sing！」
Even today Timer continues running as the top idol. The nationwide Dome Tour was also a big success!
He loved the concert very much because his fans were together and he was singing with them.
"Me and everyone, Let's sing!"


Pop'n Music 16 PARTY♪:[3]
最近TV出演ばっかりでひさしぶりのコンサートがとっても楽しみなタイマーくん！
新しい衣装が気に入ってもらえるか今からドキドキしているみたい。
After a long absence Timer has recently appeared on TV for a very fun concert!
You will love his new costume so much, it'll leave your heart throbbing.


pop'n music éclale:[4]
妖精！？アイドル！？
キュートな彼のクレイジーなステージからは一秒だって目が離せないよ！
Is he a fairy!? An idol!?
Keep an eye on that cute boy for one second from his crazy stage! 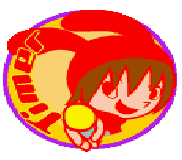 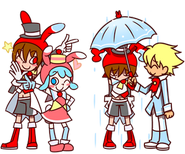 Another sketch from Pop'n Music 16 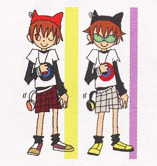 Pastel-kun dressed as Timer in the Pop'n card titled "Pastel-kun's many changes!" 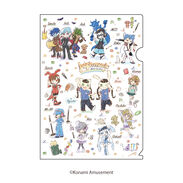 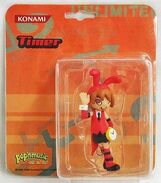 Timer and Yuli from Pop'n Music 2 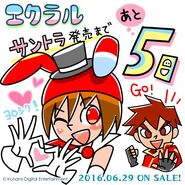 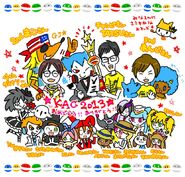 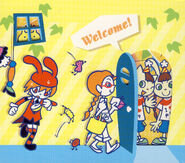