Tart & Toffee are characters in Pop'n Music 8. They are crossover characters from Beatmania IIDX 5th style.

19歳でB型な双子の女の子。タルト(金髪の方)はパティシエ、
タフィ(茶髪の方)はWebデザイナー目指してお勉強中。
Twin girls who are type B and 19 years old. Tart (the blonde one) is a pastry chef,
Toffee (brown hair) is studying and aiming to be a web designer.

Tart and Toffee are twin girls, in which Tart is a pastry chef, and Toffee is a web and graphic designer.

These characters are the debut characters in a certain beatmania IIDX 5th style's same music. It was looping it along the original work of IIDX, also in Anime.
I was allowed to debut the characters in Gitadora (GUITAR FREAKS/drummania) certainly, when my mind got to run energetically 4 models together. Sigh. The other games in company, thanks for the patronage for the Orange Lounge festival.

Tart has short, blonde hair and cyan eyes. She wears green and pink dress with lime star patterns and matching socks. Toffee is near identical, instead having brown hair and velvet eyes, with an orange and green dress. 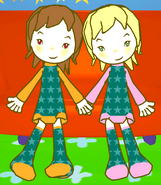