Getting wrapped in nori seaweed

Tanaka-san is one of the characters from Pop'n Music éclale.

業績急上昇中の営業部の田中さん、実は…カッパなんだって！しかも正義のヒーローで、悪？から守ってくれてる？らしいんだけど…ここだけの話だよ！
Tanaka-san, in charge of the sales department whose business performance is rapidly increasing, is actually...a kappa!
Moreover, is he a hero of justice, or evil? And what is he even protecting it from? It seems that way... just between you and me!

I'm allowed to be in charge of character and animation design for the first time, I'm very grateful!!
Anyway, I was thinking of a kappa salaryman theme, that will transform into something that feels weird (laughs)
The song's cool, flippant and soft lyrics I heard were my inspiration.
I had a great idea
Yes, this will do!!!
How is it? (laughs) I'm glad and I like it.

Tanaka-san is simply a boyish kappa, with a water-filled depression on his head surrounded by short green okappa-atama hair and green eyes. He sports a beak-like mouth and a tortoise shell. Tanaka-san dons an office worker uniform with a baby blue coat, white shirt, teal sleeves, a lime green tie and a cucumber in the breast pocket.

His 2P coloring makes him pink all over. His cucumber and tie are now yellow, his suit is white with pale blue sleeves, and a cadet blue shirt matching his underbelly. The minimal hair surrounding the water hole on his head is now yellow, his beak is a white color and his tortoise shell is grey.

Tanaka-san is the name of one of the Bemani LIVE broadcast moderators, who belongs to the independent "Tanaka-san Sales Department."

In the initial announcement of Tanaka-san's theme, a logo on the notification image reads "Tanakappaman." This logo re-appears in Tanaka-san's FEVER! Win animation.

2P Win
Add a photo to this gallery 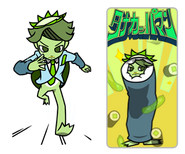 Tanaka-san with Nohoho and Mr. Aoki in the Golden Welcome campaign 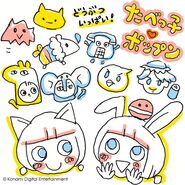