Born in Tokyo, raised in Kobe

Basking in the sun on the porch

Tamaki is a guest character in Pop'n Music 16 PARTY♪ who first appeared in the Power-up version of GUITARFREAKS8th & Drummania7th mix.


The lady that often appears in street corner posters is here!

What could she be thinking about with that sorrowful look on her face...?[1]

A woman that continuously waits for a letter from her beloved, which still has yet to arrive.

Tamaki appears as she did in the video for たまゆら. She is a young woman with black hair tied in a bun. Tamaki wears a floral kimono with a red obi and open-toed shoes. 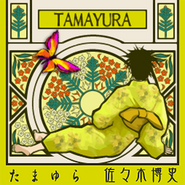 GITADORA jacket
Add a photo to this gallery