Takuto is one of the characters from Pop'n Music Lapistoria. He wields a blue, diamond-shaped lapis.

うっとおしい残響に狂いだす世界。
あの音は消えた、もうピアノは弾かないんだ…
The depressing reverberation that makes this world go mad.
That sound has disappeared, I do not play the piano anymore...

Takuto is a quiet and unsociable boy. A melancholic memory caused him to quit being a pianist until he encountered Schall, a piano ghost that only he can see, who encouraged him to find the sound that he last heard.

But in Pop'n Music: Usagi to Neko to Shounen no Yume, his younger self is more upbeat and cheery than his present self.

Takuto is a boy with short, dark gray hair and dark blue eyes. He wears a school uniform that includes a dark, pale blue vest, a platinum-colored neck tie and a polo shirt. He also wears a pair of light blue pants, dark gray shoes and a brown watch worn on his left wrist. In his FEVER! and FEVER! Win animation, his appearance drastically changed; Takuto has a tattered, open shirt with a large white tie, light gray eyes and white hair with light gray highlights, while becoming very long and messy.

Takuto's 2P has light brown hair and brown eyes. His vest becomes pink, while his pants and tie are brown. His shoes are now black. His FEVER! and FEVER! Win animation has his hair highlighted in blond with white, and the scleroses of his eyes are black.

In his Usaneko appearance at his younger self, Takuto wears a white, short-sleeved shirt with blue lines, gray shorts with straps like a combination of overalls, a pair of pale red shoes, and knee length socks with grayish blue highlights.

Takuto's 2P gives him the same colors from Lapistoria, only this time his shirt and socks are grey with baby pink lining, while his shorts are light and his shoes become dark brown.

Schall appears alongside Takuto in some animations, but he only appeared on her Miss, FEVER!, Win and Lose animations in Pop'n Music éclale.

On his change card from the Pop'n Music éclale vol.3 Card collection, Takuto wears a dark blue tuxedo with light blue sections on his bowtie and a shirt with black collar accents.

Pop'n Music: Usagi to Neko to Shounen no Yume:


ねえキミもピアノ、すきなの？
ぼくがたくさんひいてあげるね
Hey, do you like the piano too?
I'll play it for you a lot.

Neutral (The song of binary keys) 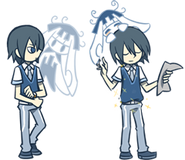 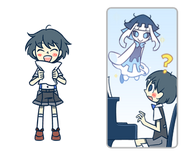