Taiga, who is Rinka's big brother, is one of the characters from Pop'n Music Lapistoria, wielding a yellow, diamond-shaped lapis. He is a main, unlockable character in her story A Shadow Chasing Rinka (鈴花を追う影, Rinka wo ou kage?).

Taiga is Rinka's big, protective brother, who controls the power of earth. Since he appears large and intimidating, he's very friendly and likes everything cute, but doesn't want to forgive himself.

Taiga appears as a tall man with deep blue eyes, light blond messy hair tied back into a braid, and a noticeable scar across his face. He wears a white shirt underneath a short black coat with gray on the end of the sleeves and on the collar, red highlights, and gold buttons. Under his sleeves white bandages can be seen. His pants are the same color as his coat, and are tied at the waist with a red sash, decorated with a blue flower pin with gold tassels. He also has red bands tied at the end of his pants, and wears black socks. He has gold earrings and a gold ring on his right hand. His original palette is reused in 霊魂爆砕 -SOUL EXPLOSION- from Pop'n Music: Usagi to Neko to Shounen no Yume.

Taiga's 2P coloring gives him tan skin, violet eyes and black hair. His pants are white with a magenta belt, and his coat is light gray with a similar magenta coloring.

Pop'n Music: Usagi to Neko to Shounen no Yume:
「お前の魂を見せてみろ！」
静寂を切り裂き、轟く拳が大地を砕く！！
"Show me your soul!"
Tear the silence, the roaring fist bruises the earth!! 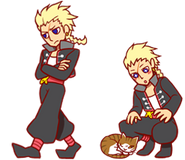 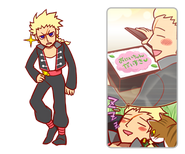