I hate weaklings. "Please remember; the road to evil was not built in a day. Devote yourself daily!"

Sumire is one of the CS characters from Pop'n Music 6.

手下の「クロミミウサギ隊」をしたがえ宇宙の平和を乱すことに情熱をそそぐ14歳。
でも、いつも失敗してばかりなんだって。
A 14-year-old who is passionate about disturbing the peace of the universe with the "KuroMimiUsagi Corps.", but she always fails.

Sumire, who is 14 years old, is the commander of the KuromimiUsagi Corps, a group of black-eared rabbits, destined to ruin the peace of the universe, but constantly fails at it. She is portrayed as a bellicose, stingy dictator, but is shown attending a school in her original Win and FEVER! Win animations.. In Pop'n Music Lapistoria, Sumire wields a pink jewel-shaped lapis; however in updated changes, her lapis is a pink diamond.

Sumire is a 14-year-old girl with long, pink hair that flows to her knees. She sports a uniform that consists of a gray, long-sleeved top with three yellow buttons, a gray miniskirt, and gray boots. Her sleeves are piped with yellow rings, and her boots are worn with red knee-high socks. Sumire wears a cap that presents the same features. Her outfit makes a cameo on her FEVER! animation in Sympathy 3. In her WIN and FEVER WIN animations, Sumire dons a school uniform that includes a red bow tie, a beige, long-sleeved short, a skirt, and maroon-colored shoes. She also sports a pair of deep purple socks with knee-length style.

In her 2P color palette, Sumire's re-coloring possesses an all-blue color scheme, with the exception of her dark violet eyes. Her hair is powder blue, while her entire uniform is colored light blue.

As Sumire joined the Marine Army, she sports a hat saying "Pop'n Music". Her uniform has a sailor theme, including white and blue colors. She wears a white, long-sleeved shirt, blue pants, and light gray boots. Sumire's hair is styled in braided twin tails. Her 2nd outfit also makes an appearance in her FEVER! animation in Sympathy 3.

Sumire's outfit features an Air Force theme, consisting of a navy blue color on her long-sleeved mini dress, a brown belt around her waist, and gray boots with maroon tabs. Her hat includes an emblem at the center. Her hair is tied in a ponytail.

Her 2P palette shifts her attire all in white with grey highlights.

Sumire excels with her hair styled in long pigtails. She dons a gray-colored uniform that consists of a beret, a long-sleeved top, white gloves, a miniskirt, and legwarmers. She also wears brown shoes.

Sumire's 2P continues giving her a cerulean uniform, while her miniskirt, shoes and pinups are white.

Sumire returns to her normal hairstyle, but with a crown braid on the right side of her hair. Her outfit is a sailor uniform, consisting colors of navy, gray and white. Her boots and hat are white with navy, gray highlights while her tie and soles are yellow.

In her 2P palette, her outfit remains the same.

In her change card, for the first time Sumire does not don a commander uniform, and gains a casual dress. She has a long-sleeved white frilly top and a light pink striped skirt with bows lining the bottom. She possesses white, fake cat ears and a tail.

Sumire also makes a cameo in the game SOUND VOLTEX. She appears on a song jacket wearing Celica's attire.

Pop'n Music 7 CS:
以外 意外に機械マニアで、スミレの乗っている車－菫113号も制作したらしい。
最近、新しいメカを設計していて徹夜の毎日なんだって。
In her unexpected machine mania, it seems that she produced a riding car - the Sumire 113.
Lately, she's working on new machines every night and day.

Pop'n Music 10 CS:
遂に空へ飛び出したスミレとクロミミウサギ隊！シンパシー三部作、堂々完結！
宇宙の平和を乱すため一生懸命頑張ってるんだけど、いつも失敗してばかりなんだって。
Sumire and the KuromimiUsagi Corps went out into the sky! The Sympathy trilogy is finally complete!
She's working hard to disturb the peace of the universe, yet she constantly fails at it.


Pop'n Music Lapistoria:
宇宙の・・・学園の平和を乱すため潜入成功!!
アレンジしたお気に入りの制服をなびかせて
向かうは、あの、伝説の樹・・・
素直になれない恋、ついに完結！？
The universe...a sneaky success for disturbing school peace!!
Winning over by arranging her favorite uniforms
Advancing, that, the legendary tree...
A love that cannot be obedient, complete at last!?

Sumire's (スミレ, Sumire's?) name is written in katakana, but her name can be formed into kanji (菫), meaning "violet". It can also mean "honesty". 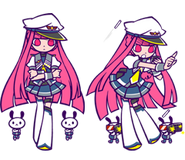 Sumire on the jacket of 恋する☆宇宙戦争っ!! あばばばみっくす in SOUND VOLTEX
Add a photo to this gallery 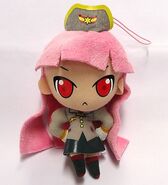