Sticking to her coverage

Being surrounded by false rumors

Suiri is one of the characters from Pop'n Music Lapistoria. She is a main, unlockable character in Retsu, Weiss, and Fuga's story, The Female Detective (探偵女子, Tantei joshi?). She wields a red, heart shaped lapis.

新聞部のリポーターとは表の顔…
今日こそ、この学園のヒミツをあばいてみせるわっ！
Reporter of the newspaper club and the face of the tablets...
Only today, she'll uncover the secret of this school!

Suiri is the reporter of the school newspaper club. Alongside her reporting duties, she also does detective work, looks for new stories and secrets to write about in the newspaper.

Rambling, there is the story with initialed development. .

Suiri's initial development, still? In fastball, and it had called on the detective, Best regards in the promise of a hat and coat from "The Female Detective!" With things. I love that of the famous detective's, just remember that you feel entirely happy~ vV just me coated with a detective.

Folder name was attached to for her created in the PC "JKT" Something like "DTO" is not! So cool ~ ☆ one brain simply ant globalization sort inclined to return. However, because this time there is a story, or character to come I involved in the story in any wind, there was a set. When I heard the story, (it is a well-detective character I anime and manga,) Apparently her stray-detective route character.

Power of the newspaper Department filled with something lovable, which is cute like a young girl. It is to discover the lost dogs and stray cats in the day-to-day to chase the story of the newspaper section, seems to have been pleased from the owner's us. Apparently, rather than detective, girl longs to detective, how?

It is special, as the set was raised here, apparently a returnees! Half or so. So her eye color is green and on the 2P's hair color is blonde!!

And it drew a desperate, 1P color once you have jumped to the eye when you open the lid of your lunch if the care, in a mouth-watering color, (fried eggs, a hamburger, an octopus's sausage and broccoli) 2P color fashionable girl color and (seems somehow of berry macaroon ...), now twice delicious feeling of a child at once.

It's not losing appetite ...

Suiri has light brown eyes and slightly darker brown hair, tied into two braided pigtails with bangs hanging around her ears. She wears a blue and gray school uniform with a yellow bow, and red thigh highs with brown boots. Suiri also wears a yellow plaid deerstalker cap, with a red bow at the top, and a matching poncho, tied with a red bow with white lining, matching her little bows in her hair.

Her 2P wears a dark magenta uniform, has blonde hair and green eyes. Her thigh highs and bows are pink, whilst her poncho and cap are peach plaited. She wields a pink heart lapis.

Suiri's original outfit was replaced by a large, grey coat with tan-brown gloves, a matching top hat with black-green plaid and a salmon red bow strap. Underneath her grey coat is a pale dark yellow vest. Suiri's hair is styled with braids in addition. This only appears in the Pop'n Music éclale vol. 1 card collection. 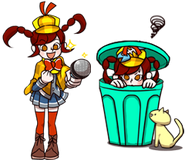