Sugi-kun is one of the characters from Pop'n Music 2.

sugi★kunとreo★kunは横浜の路上ライブから有名になったギターポップデュオの実力派！
ギターもパーカッションもこなすsugi★kunのキュートな歌声に女の子たちはメロメロなんだ。
Sugi★kun and Reo★kun are a talented pop guitar duo who became famous from a live street performance in Yokohama.
Girls are in love with Sugi★kun's cute singing voice, as well as his guitar and percussion melodies.

Sugi-kun has short dark brown hair with small bangs in the front, and black round eyes. He wears an orange, white, and blue striped turtleneck sweater with a red backpack, and a blue beret. His pants are beige and worn with red shoes with white heels.

His 2P palette changes his sweater colors to blue, and gives him navy blue pants and bright red hair. His beret becomes bright pink and his shoes, eyes, and backpack are brown.

Sugi-kun now wears a blue turtleneck jacket with orange and white striped sleeves and a dark blue zipper. He keeps his blue beret and beige pants, an his shoes are now white with orange trim. He wears white rimmed sunglasses with a lime tint and carries a red tambourine.

In his 2P palette, his eyes are brown and his beret is shifted to white. His sleeves become red and white striped, and his jacket and pants gain darker blue colors. His hair is bright red in color and his tambourine is pink.

Sugi-kun appears in the Pop'n Music Sunny Park Card Collection wearing a blue beret, plaid black pants, and a blue-gray plaid scarf over a beige vest with brown and purple argyle and a white shirt. His shoes are white with brown stripes.

In promotional art from the Pop'n Music site, Sugi-kun is pictured with Sanae-chan, Rie-chan, and Reo-kun wearing a long red coat, gray pinstripe pants, brown shoes, and a maroon backpack. He wears similar attire in Sanae-chan's FEVER! and Win animations in Pop'n Music 3.

Sugi-kun appears with Reo-kun in Pop'n Music 20 fantasia wearing his blue beret and a blue vest over a dark gray shirt and white tie. His pants are beige and his shoes are white with blue trim.

この間までのんびりと、レコード買ったりライブに出たりレコード買ったりしてイギリスやベルギーを回ってたんだって。相変わらずマイペースは変わらないみたいだね。
Until this time, he has traveled around the United Kingdom and Belgium and bought records during his stays. It seems that his usual pace has not changed.

Autumn is the perfect season for a walk in the park. Wrapped in my favorite muffler, I wonder if my next lyrics will come up if I were to step in the crispy fallen leaves.

Reo, Sugi, Rie, and Sanae in a promotion image 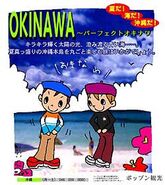