Steve is one of the characters from Pop'n Music 17 THE MOVIE.


任務がとてもハードなので、オフの日はのんびり過ごすよう心がけてるんだって。
A specialist who never sleeps to protect the town day and night from disaster.


Because the mission's very hard, he's willing to spend a leisurely day off.[1]

Steve is an American fireman wearing a black uniform with yellow stripes. Underneath his helmet is shaved blonde hair. He has a band-aid on his face, a fire extinguisher secured to his back and black gloves to go with his uniform.

His 2P palette has the color motif of Japanese firemen: a gray suit and cap, and green and red-orange colors around. Steve's eyes are green, and his skin is tanner than his original palette. 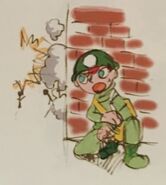