The world will be shinier, so let's laugh and play for our future[.] 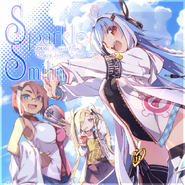