This article focuses on the song, Smooooch・∀・. If you are looking for the character, see Smooooch (character).

Soundbites include "Move your body", "Come on DJ work this party", and "Look up in the sky, it makes you feel so high".

※ The notecount of this chart is different from the old 5-Buttons chart (total notes: 225). 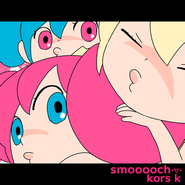