Being mistaken as a mummy, the pigeons in the park

Smile is one of the characters from Pop'n Music 4 and the third member of Deuil.

ステージ上ではクールだけど『Deuil』のメンバー一ひょうきん者な透明人間さ。実はファンの見ていないところでヘンテコな歌を口ずさむクセがあるんだって。
Although he's cool on stage, he's an innocent invisible man who's a member of "Deuil". He actually seems to have a habit of humming a strange song when his fans can't see him.

Smile is the bassist and the last member of the band Deuil from Pop'n Music 4. He's mysteriously described as an "invisible man", and is quite a joker. He often takes advantage of his ability to become invisible when he is performing, making fans confused and thinking that he is absent, while he hums. Smile is also a fan of Gambler Z. According to Pop'n Music 12 Iroha, Smile works as a chemist, when he is not rehearsing.

Smile's appearance is a pale blue-skinned man with red eyes with bandages around his left eye and his neck. Smile's attire is a tan jacket with a brown lining an a red band that he wears on his left arm like Yuli and Ash. He appears to have brown pants, light tan gloves, and blue boots, as well as two gold piercings in his left ear.

In his 2P color palette, Smile's hair is green, plus the coat is a very dark brown, the crosses are tan, and the boots are brown, but the band and his skin color stayed the same. His 2P color palette is shown in Hip Hop, from ee'MALL in Pop'n Music 14 FEVER!.

﻿Smile's attire is silly, consisting of an orange coat with purple buttons, a purple patch, and a purple skull in the bottom, while the red band remains the same. Pumpkin leaves pop out from his head. He wears blue, patched jeans with two mixed shoes: the brown cowboy shoe and the purple, wacky business shoe. He begins holding his flask with a red potion inside. His piercings are now purple instead of gold.

Smile's 2P gives him lavender colored hair, and his skin tone and eye color remain the same. His coat is instead light blue with darker blue buttons, a blue skull, and a blue patch. His pants become purple and his shoes are now colored blue and white. The liquid inside his flask becomes yellow.

Smile appears in a spin-off, taking up a more grim appearance. He wears a dark brown coat with several stitches throughout it and red buttons. Underneath he wears black pants and brown stitched shoes with red heels. He plays a dark red bass guitar with a bat motif.

Smile gains new garments, which includes a navy blue top with a split on the bottom, matching boots with pale violet toetips, and gray pants, along with a pale violet cape with gray accents. His light tan gloves, additional to his bandages, are reverted from his debut. Smile has a skull with small horns on the top of his head, which acts as an anthropomorphic object.

Smile's 2P re-coloring gives him pink hair, and lighter colors of light yellow and white for his pants and cape (especially the skull on his head). His entire outfit consists of a plum purple color and mist white toetips. Smile's skin is tinted with a lighter shade of gray instead of his regular pale blue skin.

In the Pop'n Music Sunny Park Card Collection vol. 2, Smile's change card attire consists of his Gambler Z themed night robe, with a yellow striped color and red "Zs". Smile wears red gloves and black boots, and has a blue satin bow on the left of his waist. On the right of his head is a Robot Gambler Z mask. Smile holds a weird-looking object with an open mouth.

Pop'n Music 12 Iroha:
長い長い夢から覚めたら、あれれ？頭から葉っぱが！
元に戻す薬はなかなか成功しないみたい・・・
Huh, you've woken up from a long, long dream? Leaves are coming from your head!
It seems that the restoring medicine isn't quite successful...

They say that the summertime will certainly attract spirits! And it seems that the enthusiastic Smile was caught in a yukata boasting some rare items, including a Gambler Z mask. "Heeheehee, but I'm not a ghost~" 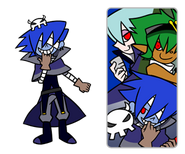 Smile as he appears in Ecale 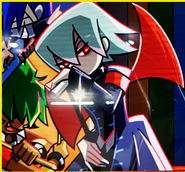 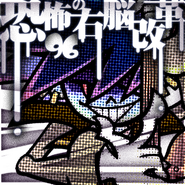 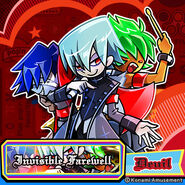 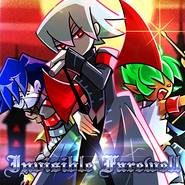 Smile's charm with the rest of the Deuil members 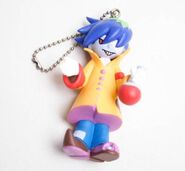 Smile on the Deuil poker chip with Ash and Yuli 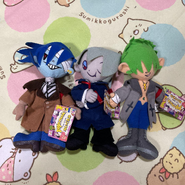 Plushies of Smile, Ash and Yuli

Smile on the Pop'n Music 10 eamusement pass with NaN 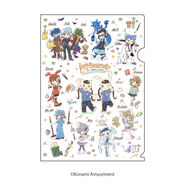