When I made this song, I thought it would be nice to make something for girl BM players. So, I came up with a kind of cute melody, and arranged it into something that I thought would make for interesting gameplay. (Real "makina" music is usually a lot simpler!) I hope it all makes you think of summer and cute things! Oh, about the title, "SigSig". It does mean something, but it's too embarrassing to tell you, so I'm not going to ^-^; 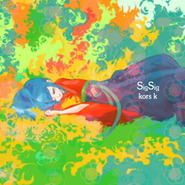 SigSig's pop'n rhythmin Jacket
Add a photo to this gallery