Man's pursuit to the end

Hello! It's Shoccho, somehow back again for another collaboration! This is the fourth song I've written this year alone.
The time went so fast. In just a few short months, PON and I composed a new song together! Recently, PON's been doing a lot of vocal work, so we agreed to write something instrumental for a change.
Actually, I'm writing these comments before the song is released, and the anticipation is making me a bit nervous!

Everyone, let's pursue the end together!

When planning our collaboration song, it took a while to figure out what sort of song it should be. We decided to create a hard instrumental 4-beat song.
When dividing the work, we decided that Shoccho would compose the song and I would do the arrangement.

We wanted to create a 4-beat song completely unlike any other 4-beat song. We added sections with unison and irregular timing, and tried to give it the energy of a game soundtrack.
I had a lot of fun discovering how to arrange this song in a unique way.
Collaboration helps you grow as a person! We reached perfect synergy. It's really amazing. 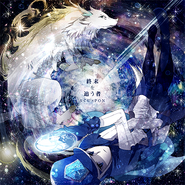