Looking at the mirror, smiling

Shoko, also known as her full name Shoko Aoi (蒼井硝子, Aoi Shouko?), is one of the characters from Pop'n Music 14 FEVER!.

素直に自分を出すために、毎日鏡を見ながら微笑みかけてるの。
いつか素直に微笑めるように。。
I smile while looking at the mirror every day in order to make myself obedient.
Someday, I will be able to smile honestly...

Shoko appears as a junior high school student with dark teal eyes and powder blue long hair, reaching to her thighs. She wears a school uniform for females, consisting of a black jacket, a red neck tie, a gray skirt, knee-length socks, and black shoes. Her original palette is confirmed again in ホタルノヒカリ from Pop'n Music 18 Sengoku Retsuden.

In Pop'n Music Sunny Park, Shoko's attire remains unchanged, but without her jacket, it reveals her full uniform. It includes a vest dress and a short-sleeved shirt. Her original palette is confirmed again for Engagement from Pop'n Music éclale.

Her 2P color is confirmed in sister's noise from the same game.

Shoko's 3P color palette contains a darker tone, carrying the colors of midnight teal for her uniform, light pale blue for her eyes, socks and shirt, and dark periwinkle for her hair.

Shoko's casual attire can be only found in the Pop'n Music Lapistoria Card Collection. She wears a light blue dress with white highlights and layers and shoes, and she only carries an umbrella with pink, yellow, white, and blue sections. Shoko's hair is styled into a thin ponytail with a white bow, while the rest of her hair hangs short. 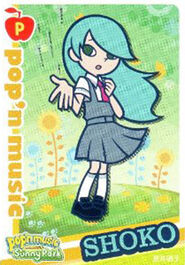 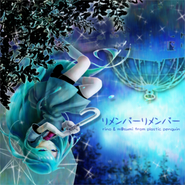