Natsuhi Shinonome is one of the characters from Pop'n Music Lapistoria, who originates from a Bemani band project, HinaBitter♪. She wields a red, heart shaped lapis.

双子アイドルユニット「ここなつ」の1人。
大好きな妹と一緒にご当地アイドルとして活躍中だよ！
One of the twin idol unit "CocoNatsu".
She is working together with her favorite younger sister as your local idol!

Natsuhi is a first year high school student from Sakurano High, who is the twin sister of Kokona, known as the duo group, CocoNatsu, and rivals of HinaBitter♪.

Natsuhi is the "tsundere" trope out of the CocoNatsu group, and is always being prideful, but very kind. At first, she claims Hinatabi Bitter Suite♪ is their enemy. For example; Ibuki tried to be kind to her, but she is always rejecting. It is revealed that she is actually jealous to them. With the help of her and Marika, she became friends with them, but, still being their rivals. Also, she loves EDM, reading and construction.

Natsuhi has medium blue eyes and light reddish brown hair tied into two pigtails with black and pink accessories. She dons a white sideless dress with black trim, buttons, and a sheer magenta section in the front. The upper part of the dress is also sheer with short sleeves, connecting into white and black gloves. Underneath she wears a black bra, shorts, and white thigh high boots. 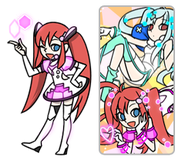 Natsuhi with Kokona in her Great animation