Kokona Shinonome, voiced by Yuri Hinami, is one of the characters from Pop'n Music Lapistoria. She originates from a Bemani band project, HinaBitter♪. She wields a blue, heart shaped lapis.

双子アイドルユニット「ここなつ」の1人。
お姉さんと一緒にご当地アイドルとして活躍中だよ！
One of the twin idol unit "CocoNatsu".
She is working together with her older sister as your local idol!

Kokona is a first year high school student from Sakurano High with a love for EDM. She is Natsuhi's twin sister, known as the duo group, CocoNatsu, and rivals of HinaBitter♪.

Kokona is a shy, self-conscious girl who normally wears glasses, but she keeps them off while doing performances. She also uses a tablet to communicate with people.

She and her sister are very close, however, they are determined to achieve their dreams. She is fascinated by strange animals. Natsuhi and Ibuki are scared, but Marika and Meu Meu like them because they think they're cute. Also, she enjoys eating sweets and making models.

Kokona has light powder blue hair tied into two pigtails, with small braids around each, and light brown eyes. Her attire consists of a white backless and sleeveless dress with black lining and a sheer cyan front, extending into a short white skirt with cyan highlights. She wears matching thigh high boots, a black bra, and short white gloves that extend up her arm into black and cyan sections. 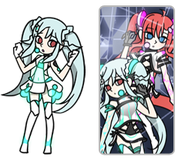 Kokona with Natsuhi in her Great animation