Getting to play on the piano

Schall is Takuto's ghostly partner and companion from Pop'n Music Lapistoria, making her appearance in Pop'n Music éclale. Her name was given on his character information.

全部なくして漂ってた私に、あの日流れ星みたいにきらめく力をくれたんだ。ねえキミのピアノ、もっと聴かせてよ！
I was drifting by eliminating all the shining power, just like a shooting star on that day. Hey, let me hear your piano more!

Schall is a cheeky "piano ghost" who lives in Takuto's piano and is only visible to him. She is able to change her appearance between a childlike form and a more mature one who is seen controlling him at times, changing his appearance and forcing him to play the piano.

I love Takuto's piano!
Schall is the piano spirit. Hey, everyone!

She have just gotten bigger from her debut of her small form to stick with Takuto in Lapistoria previously!! And, I think that I don't feel like my mother around everyone, including red glasses. Fortunately, she became just large~! When I abound in the chance to meet red glasses in Lapistoria, I discussed him after I was embarrassed and cannot continue my name in a separate item of decisions, offering a sale for an exact pass case; furthermore, I was able to meet him one time luckily, I got a cute and lovely name! Thank you very much!!
From there, I'll be able to take the new tune after all! Since I can fairly proceed to progress more timing than measuring the entire thing, Schall experiences that she is an exceedingly destined person.

Schall's costume, who became bigger, gets the feel that kind of graded up from her Lapistoria design, but this images Schall from her previous phase from Lapistoria. She had him playing the piano in proportion to play, absorbing around the piano power from an already small Takuto, Schall fells likes this time is going swimmingly.
Takuto becomes like he's running continuously to his self who "played" undauntedly, as he get's older. His self is awake.


It's likely a variety from now on, since I'm going to change my way to associate if I pass this time!
I am thinking that I am grateful for the design target that was easy to understand to have Schall and Takuto together for a long time, because the feature is quite slight to compare the other Pop'n characters, as Takuto's true person was seen.

Schall is born as a piano-inspired, caricatured human with pale skin, long white hair with straight bangs having black messy sections and pale, dark blue eyes with periwinkle irises. She appeared wearing a dress with blue color schemes, all dark, medium and light with matching leggings; one of them on the right is periwinkle while the other on the left is light periwinkle. When she transforms into her small ghost form, as seen in her Miss, Win and Lose animation, she has dark periwinkle around her bottom, shoulders, neck and less hair. Schall also has simply dark blue eyes in this form.

Schall's 2P variant gives her the identical palette from Takuto's 2P, but with drastic changes: she has fuchsia irises, a very light pink complexion, dark and normal pink sections, and chiffon sections in her entire appearance. 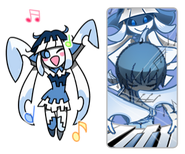