A world without donburi

Ryuta is one of the characters from Pop'n Music 8.

恋もバイトもまかせとけー！！ちょーマイペースな高校生。
最近は電車でみかけるあのコが気になるみたい！？
Letting love bite!! A high school student always at his own pace.
Recently he seems anxious about a girl he saw on the train!

Ryuta is an energetic, loving high school student who has crushes on both Mimi and Nyami. He's often shown serving dishes, presumably as a part of his job. He also likes making and e-mailing friends, especially flirting with cute girls.

Ryuta is a tan-skinned high-school kid with fluffy, blond hair and black eyes. He wears a school uniform that has a light cream vest, turquoise neck tie, and a white shirt underneath with the sleeves pushed up. Ryuta's bottom garments are a pair of dark teal pants and brown shoes. His original color palette is also used in キセキ from Pop'n Music 17 THE MOVIE.

Ryuta's 2P makes his hair dark brown and his skin lighter. His vest is teal with a red tie and dark blue pants. His 2P color palette is shown in ションボリ from ee'MALL 2nd avenue.

Ryuta wears a pink hoodie over a long white shirt and a gray jacket with elbow-length sleeves over it, as well as dark gray jeans and shoes, with pink shoelaces. He is shown carrying a yellow backpack and headphones.

His 2P colors his hair medium brown, while his skin tone turns lighter. His eyes are magenta, while his hoodie is sky blue with a white and light gray coat. His backpack and the shirt under his hoodie are pink.

In Lapistoria, Ryuta makes a cameo in Roku's FEVER! Win animation, along with San and Yuzuru.

Pop'n Music Lapistoria:
毎日が青春いっぱい・バイト三昧！
どんな世界もオレ心を癒すのは可愛いの女の子たち…なんだとか？
Full of youth every day, an indulging bite!
The cute girls of the world heal my heart...what was that? 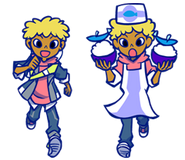