Cosmic rollerblading gives me confidence in myself!

A girl in love has many enemies!

Ryusei Honey is one of the characters from Pop'n Music 12 Iroha.

Ryusei Honey is a cosmic heroine who skates through the stars with her Cosmic Roller. She has a rivalry with Suisei Laura.

"Energetic, cute, lonely, and just a little ecchi *g*"
↑ I got a copy of the song from Akira with that comment.
I thought, "Cute and energetic means a ponytail!", and got straight to work;
with "Ecchi? That'd be a miniskirt!" I started working even harder!!
Even though everyone would say, "Huh!? What's so great about that??",
I'd do it because "'coz that's still the kind of thing I like!!"
I dunno if it's kind of childish but it's just that kind of one-sided love story, right?!

This is overall a great song with a really good beat,
but the best thing about it is the shouting!
There were even two people on the team
who would play the song while shouting the words.
It sounds like they're saying "P.L.A.N.E.T.",
but since I can't really tell when I listen to the song,
I'll have to leave my shouting debut until next time when someone can tell me what they're saying. 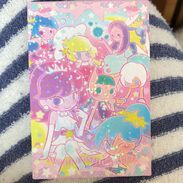