Considering a topological view of the universe and donuts

Root is one of the characters from Pop'n Music 20 fantasia. Her full title is Root@Chodooken, the latter half referring to the institute she works at.

るー先輩は学園内の超有名人にして超天才理系超美少女であり超－
－－残念な人。＠某超電子ドーナツ研究部員
Root is a super-genius scientist, super-beautiful girl, and a super-celebrity at the school ---

Root is one of the main, unlockable characters in Pop'n Music Lapistoria by clearing Nicolas, Rars, and her own story, Donuts Equation (ドーナツ方程式, Dōnatsu Hōteishiki?). She wields a purple, jewel-shaped lapis.

Root has short black hair tied into two pigtails and plain black eyes with glasses. The right side of her hair is decorated with a white "√" hair clip. She wears a uniform consisting of a gray vest with a white shirt, a blue necktie, and a matching pleated skirt beneath a white lab coat. Her stockings are black and worn with green slippers. In her Lose animation, Root dons a black, cliched maid attire with white laces and a matching apron overlapping and a head piece. This is used again in the Sunny Park Card Collection and the April Fool's joke.

Root's 2P color shifts her hair to sky blue, and her eyes are green with gray rimmed glasses. Her uniform is deep teal with gray stockings and yellow slippers, and her lab coat remains white.

Root's appearance remains mostly unchanged, although her gray uniform is instead replaced with the standard blue and gray Lapistoria uniform. The rest of her attire is identical to her debut. In her Lose animation, she gains attire similar to that of her Dooken@Invitation Party appearance, although the dress instead has a plain frilled neckline with a white bow, and the donut ornaments of her headband are absent, instead having simple bows on each side. This palette is recycled in 天才少女が解けない問題 from Pop'n Music: Usagi to Neko to Shounen no Yume.

Her 2P palette switches her hair to bright turquoise and her eyes to blue. Her hair clip is pink, and her uniform is deep blue with a pink tie, gray stockings, and yellow slippers. Her Lose animation colors her dress in all white. In this palette she wields a blue, jewel-shaped lapis.

Root appeared in the first series of Lapistoria cards on the Concert Amongst the Plants♪ rare card with Robin & Cock, Fuwawa, and Lucifelle, wearing her current Lapistoria attire sans her labs coat.

Root also appears on the rare card, "Dooken@Invitation Party", with Mimi, Nyami, Rars, Rosemary, Ninjin, and Lica wearing a fancy black dress with white lace. Her headband matches her dress and is decorated with donut pins.

当部は超天才理系超美少女るー先輩を中心とし、
ドーナツから宇宙の真理を究明すべく新入部員捕獲は
ドーナツによる催眠プロセスを導入しております
＠某超電子ドーナツ研究部員
Our headquarters is centered on the super beautiful super-genius scientist, Root.
In order to investigate the truth of the universe from doughnuts, we've recently introduced a hypnosis process via doughnuts in order to recruit new members.
@A certain member of the Ultra-Electron Donut Research staff' 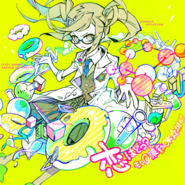 Root on the jacket for 恋はどう?モロ◎波動OK☆方程式!! 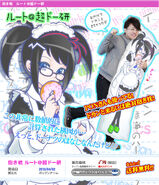