Romio is one of the characters from Pop'n Music 10.

六本木の朝の空気は独特だ。
ハードボイルドワンダーランド。
The morning air in Roppongi is very unique.
It's a hard-boiled wonderland.[1]

Romio has straight brown hair with spiky ends and black eyes. He has tan skin and wears a white suit and shoes with a black scarf. His suit top is left unbuttoned, showing his chest. He also wears a gold belt, necklace, and wristwatch.

Romio's 2P coloring changes his hair color and skin tone to lighter shades, and his suit is colored deep red. His accessories are silver and his eyes remain black. His 2P is used in the ee'MALL 2nd Avenue song J-Rock in Pop'n Music 10.

Romio dons an all white suit once more with slightly darker shoes. He now wears a vest underneath his suit coat, with a black shirt underneath and a light blue scarf. This coloring is used for 女々しくて in Pop'n Music 20 fantasia and ギンギンパーレー!! in Pop'n Music: Usagi to Neko to Shounen no Yume.

In his 2P palette his hair is deep red and his eyes are light blue, while he now has a pale complexion. His suit is light pink with dark brown shoes and a purple vest. His scarf and shirt are white. This palette is used again in Electric Manoush Swing in Pop'n Music Sunny Park.

Pop'n Music 16 PARTY♪:[2]
ネオンが俺を呼んでいる・・・・
お前の心も体も酔わせてやるぜ。
The neon is calling me....
I'll intoxicate your heart and body.

Romio's name is a pun on "夫," the Japanese word for husband, and "Romeo." 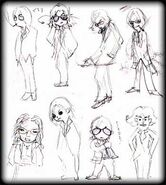