View source
This article focuses on simply the Pop'n Music 11 character, Roki. If you are looking for the Pop'n Music 19 TUNE STREET song, also known as Runic Air, see Princess Roki, and for the Mikito-P song, see Roki (mikitoP).

Roki is one of the characters from Pop'n Music 11.

Roki is a woman full of pride for herself and the things she enjoys, such as her family. She's known as the queen of the forest (or "princess", in her Princess Roki appearance). She is known for being short-tempered, and will get extremely furious if things don't go her way. In Pop'n Music Lapistoria, Roki is an unlockable character in Eclipse and Phantom's story, Forest Witch (森の魔女, Mori no majo?), and she wields a white diamond lapis.

Her 2P color palette makes Roki's hair and clothes entirely black, while her skin is extremely white and her eyes are red. Her eyeliner is also black.

Roki dons a long white dress with red gloves. The dress is attached to her right shoulder, while the other side is sewn on. She also wears deep purple makeup. Her original palette is reused in Monkshood from Pop'n Music: Usagi to Neko to Shounen no Yume and Enigma from Pop'n Music Kaimei Riddles.

Roki's 2P color palette drastically changes her hair to a dark pale blue and her eyes light brown; her dress and gloves swapped colors and her makeup is red.

﻿Roki appears as a child, while the rest of her appearance is identical as her debut, though her blouse also has a hood attached. Her pigtails are trimmed into bun size.

Her 2P is also much like her debut, giving her white skin, red eyes, and all black hair and clothes.

Roki's hair is decorated with a crown of thorns with a gray veil, as well as black cords wrapped around her bangs. She once again wears a long white dress, now decorated with gray fur around the shoulders and red slits on the sides. She has a gray choker, black gloves, and black boots.

Her 2P palette gives her dark blonde hair, pink eyes, pale green skin, and a white veil. Her dress is blue with pink slits and orange fur, and her choker is also orange. Her gloves and boots are white. In this palette, she wields a yellow diamond lapis.

Pop'n Music 13 CARNIVAL:
誇り高き一族の集会が始まる。
許しなく覗き見た者は報いと裁きを受けるだろう。
The meeting of our proud family begins.
Anyone who looks without permission will receive a reward and our judgement.

Pop'n Music 19 TUNE STREET:
プリンセスの歌声に森の住人たちが集い出す。
ちいさなロキが偉大な魔女になるのは、もう少し先のおはなし。
The forest's inhabitants gather to the princess' singing voice.
This is an earlier story about how the young Roki became a great witch.

Pop'n Music Lapistoria:
静まり返る森の奥深く…森の住人達が見つめる先には、
誇り高き一族の戴冠式に臨む女王の姿があった
Deep inside the forest that has fallen silent...the forest inhabitants stare ahead,
facing their queen's figure during her coronation for her proud family. 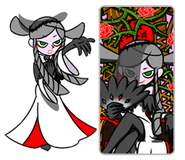