The bicycle that her grandfather gave her

Risette is one of the characters from Pop'n Music 7.

スウェーデンの寒さに負けない元気さで街中の評判なスクールガール。
でもたまにはちょっとブルーになる日もあるみたい。 だって女の子だもーん。
A school girl who has a reputation for not losing her vigor in the Swedish coldness.
But there are some days where she'll be a little down in the dumps. She's just a girl after all.[1]

Risette is a girl who was transferred from Sweden to Japan with her family. She is active, cute, and can barely sit still. Tolerant of cold weather, Risette loves to watch and participate in sports, especially cycling. Her bicycle is her most prized possession, as her grandpa gave it to her. She also seems to find pleasure in sniffing things that smell good to her, such as chamomile and bergamot.

In Pop'n Music Lapistoria, she wields a white, diamond-shaped lapis.

Risette's first appearance is a Swedish-originated school girl with cerulean-colored eyes. Her walnut-colored hair is styled into braided pigtails with red hairbands at the end, and has two red clips located on the right side of her curly bang. She can be frequently seen wearing red glasses. She wears a school uniform that consists of a blue plaid skirt, a teal vest, a velvet neck tie and a white shirt underneath. She finally wears black knee-socks and maroon shoes. Her original color palette is shown again in ベルガモット組曲, from Pop'n Music Lapistoria.

Her 2P color palette has been confirmed in College Pop, from the ee'MALL portion of Pop'n Music 9.

Risette switches to her casual clothing, such as a white dress, a brown hat with a blue tab, and powder-blue slippers with red highlights and brown soles. She was only holding a daffodil on her hand in several of animations.

Risette's attire is a blue-striped tank top, with white khaki shorts and flats. She is frequently shown with a parasol that has pink, blue, green, and yellow highlights.

Her 2P color palette changes Risette's hair color brown, the khaki shorts into the color of jeans, and goldenrod flats. Her tank top is pink with gray stripes, and her parasol gains red and a lighter version of blue.

Risette's Change Card has a new uniform, such as a  blue jacket with a dark teal neck tie and a brown plaid skirt. Additional content includes black tights and light tan shoes with white socks; Risette also have a white clip hanging to her left side. This card only occurs in the Pop'n Music Sunny Park Card Collection.

Pop'n Music 8:[2]
今年も湖畔のサマーハウスに家族みんなで数ヶ月のバカンス。
夕暮れ時にひとりであちこち散歩するのが大好きなんだって。
This year as well, she's on vacation with her family at a lakeside summer house.
She loves to take walks here and there alone during the dusk.

Pop'n Music 16 PARTY♪:[3]
今日の気分予報は曇りのち晴れ。だから虹の向こうまで歩いてみよう。
Today's forecast is cloudy and then fine weather. Therefore, she's gone to walk to the other side of the rainbow.

Pop'n Music Lapistoria:[4]
ねぇ教えてよ、あの子に隠された朝焼けみたいなベルガモットの香りと、素敵な秘密。
Hey, tell me the secret to that Bergamot fragrance, akin to a morning glow, hiding on that girl. That wonderful secret... 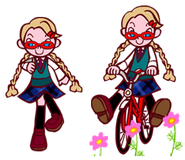 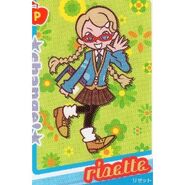