Gardening, such as growing flowers

Rinka is one of the characters of Pop'n Music Sunny Park. Her element is Nature.

終わったはずの物語…キミが望むなら、もう1度咲かせてあげる！
The story that should've ended... if you desire, it will bloom once again!

The girl who manipulates flowers. She seems to be in love with Nyaguwa, who is the mascot from GITADORA. Rinka wields a pink heart-shaped lapis when she arrives at "Another World", created by MZD. She has an older brother named Taiga, who debuts in Lapistoria.

Rinka is a sweet, polite young girl who has a positive look. She likes things considered feminine, such as fashion, makeup, otome games, desserts and sweet drinks. She also likes making new friends as shown; where she first met Toa. Rinka uses her nature manipulation against the sinister. She's almost always happy and loves gardening and uses her abilities to create gardens.

When their parents passed away from an illness, Rinka's big brother, Taiga, decided to take care of her. One day, her florakinesis was awakened. Rinka became excited about her powers, and she told her brother about them, and he was impressed.

Later at school, Rinka received a science project from her teacher about nature and plants. She attempted using her ability to work on her assignment, but the next day, while she brought her homework to class, one of her classmates has been bullying her because of her plants, causing her to run away from school. Later, Taiga cheers her up and tells her about how people don't understand her powers, making her feel better. The other day, she was scouted by Mimi, who is surprised by her powers,but she understood Rinka, and wanted the latter to practice her floweriness. Taiga gave her their mother's fan that she can use to channel her abilities.

Rinka is described as a Chinese female with indigo eyes and black, shoulder lengthened hair with braided strands on her side bangs. On her hair are some light pink flower-themed hairclips, which act like hair buns. Her vestments is themed to be a Chinese design; Rinka wears a dress with blue highlights on the bottom and on her torso. Her skirt is parted with a velvet magenta hue, decorated in yellow four-petaled flowers. She has white bangles worn on her wrists and on her ankles. Rinka wears blue stockings and velvet flats, and mainly wields a yellow paper fan.

Rinka has pink flower-themed hairbands that are securing her pigtails while she gains her new vestments, such as a white vest with pink, puffy sleeves, light blue highlights and a yellow butterfly on the center. She wears a pink skirt, a yellow bow on the back of her waist, some gray stockings and yellow pumps with white bottom linings.

In her FEVER! Win animation, her flashback was shown as a child; wearing a white blouse dress with a yellow bow on the chest and a pink bow on the back. She also wears matching shoes with white socks.

Rinka's 2P recolors her hair into a honeydew color instead of black. Rinka's entire apparel is colored purple, especially her eyes and additional to a lavender color in the rest of it. The flower accessories are colored white. Her lapis is green instead of her pink color scheme. Her color palette appears again in 曼珠沙華 from the same game.

In Pop'n Music Lapistoria, Rinka makes a cameo on Albireo's Lose animation, but she became a background character on Miyu's lost photo, as seen in her Lose animation. She also make cameos on Taiga's FEVER!, along with Retsu, and FEVER WIN animations.

In her change card for the fist time, Rinka wears a kimono inspired dress; showing pastel colors of pink, yellow and lilac with white flower printing. She also a bouquet of flowers in her hair whilst having bows at the end of her braids. This only appears in the Pop'n Music うさぎと猫と少年の夢 vol. 1 card collection.

Pop'n Music Lapistoria:
お花が大好きな女の子。ラピストリアをお花でいっぱいにするために毎日頑張っているんだって！
A girl who loves flowers. She is working hard everyday to make Lapistoria full of flowers!

2P Neutal
Add a photo to this gallery 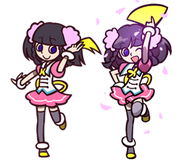