This article focuses on the Pop'n Music Sunny Park character, Retsu. If your are looking for the game title, see Pop'n Music 18 Sengoku Retsuden.

Buying and eating hot snacks from the convenience store

Transfer student in the next class

Retsu is one of the characters of Pop'n Music Sunny Park. His element is Fire.

己が『浄化』しない限り、望む日常は戻らない…
Unless you "purify", the everyday life you desire will never return...

The ignorant, fire-manipulating student Retsu has a fondness for fighting games and trashing everything that he hates the most. Retsu wields a red jewel-shaped lapis, when he arrives to "Another World" created by MZD.

Retsu is cheerful, happy-go-lucky and very loyal to his friends, even MZD. He gets really excited as his hand starts bursting into flame when he's happy about something, but nothing makes him happier than hanging with his friends or going on adventures, making most of his days with fiery optimism. He also has a pet crow, enjoys playing fighting games and eating hot snacks.

He tends to make impulsive decisions that can be rushed and reckless; when Rinka confides that she may be being stalked, and that her stalker is listening in, Retsu immediately runs off to fight him without thinking of the dangers. He also seems to be emotionally volatile; in the story Crossroads, it's revealed that he bases a lot of his worth off his ability to purify and his role as a "hero." When he loses his purification powers, he becomes unstable, lashing out at his friends and eventually, under Jade's influence, losing control of himself entirely.

Like the rest of the Tsugidoka! gang, he has a strong sense of justice, using his fire manipulation to protect the innocent from evil. He is implied to be the protagonist of Lapistoria, as his lapis, the red faceted gem, is featured prominently in the logo and the opening animation.

Retsu lost his family at a young age due to a house fire, which is heavily implied to have been caused by his immature pyrokinesis ability. After the accident, he was taken in by his grandmother, Akane, where he became afraid of his power due to the incident which took his parents' lives, so she decided to teach him how to utilize and control his ability. After a while, he was fully in control of his powers, but Akane told him that there are some people who have elemental powers like him, who he met and eventually befriended.

Retsu is sincerely introduced as a redhead boy with red eyes and short hair. He wears a blue-colored uniform: a dark blue jacket with powder blue highlights, pants, and black-white shoes. Underneath Retsu's jacket is his white shirt, and what's hanging on his pants is a black-orange belt. Retsu summons a crow on his shoulder mainly.

According to Retsu's 2P color palette, his re-coloring resembles a water element; however, he seems to be a blue fire thematic. Retsu's hair changes to gray instead of redhead color, and his eyes are mainly cerulean. His entire uniform, except his shirt, is colored black with yellow jacket highlights. Retsu's shoes are lightly tinted to a darker color of blue. His 2P color palette has been confirmed in Spiegel.

Retsu doesn't seem to have a new attire, but his appearance only shows his white dress shirt, with blue stripes on the sleeves, and a blue shirt underneath. His tennis shoes are black with red laces and now wears a wristband matching his chain, worn on his right wrist, also adding an additional silver chain.

Retsu's 2P has dark skin, blonde hair and black eyes. His shirt is black with white, thin accents on each sleeve and a red undershirt underneath, matching his crow, wristband and belt. He has white pants and red tennis shoes with part of them remaining the same. Retsu's lapis is colored yellow instead of his original color scheme. His palette is confirmed in 暴レ焔.

In Lapistoria, Retsu, along with Hiumi and Rinka, appear on Albireo's Lose animation. Retsu also makes a cameo in Miyu's Miss animation, talking to Hiumi.

In one of Fuga's stories, The Identity of the Insurance Doctor...?, he is shown wearing sportswear, such as a white shirt with light blue highlights, and blue pants.

In pop'n music peace, Fuga appears alongside Retsu in his portrait and animations.

真紅のラピスにいざなわれ、たどり着いたラピストリア。その手に宿る浄化の炎で運命を切り開け！！
Departing using the crimson lapis, he arrived at Lapistoria. In his hands rests the flame of purification that opens up fate itself!

烈 (retsu) is an alternate kanji for the word 激しい (hageshii), an adjective meaning "intense; extreme; fierce." Incidentally, 烈 is also the first character in the words 烈女 (retsujo) and 烈士 (resshi), meaning "heroine" and "hero" respectively, referring to his status as a hero and protagonist. 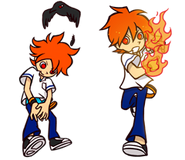