Fans with no sense of distance

Rars is one of the characters from Pop'n Music Lapistoria.

成層圏を魅了するボーカリストとは彼のこと！
開催中の太陽系惑星間ライブツアーのチケットは宇宙最速SOLD OUT！
He's the vocalist that captivates the stratosphere!
The solar system interplanetary live tour has the fastest SOLD OUT tickets in the universe!

Rars is the most popular alien singer from outer space, frequently going on live tours throughout the solar system, notable for having tickets quickly selling out. He is usually accompanied by Poulpe, a small pink alien sitting on top his head, and is being seen with other similar aliens.

Rars has fuchsia-colored eyes and deep magenta, short, messy hair. He sports a dress-like costume that goes to the length of his knees and has a light gray midsection with several white buttons, pale blue sleeves and sides, and white trim on the collar, sleeves, and bottom. He also wears a gray neck tie and white boots. Rars is shown carrying a rocket microphone that forms into a straight orange and yellow laser. According to his Lose animation and change card, his real hair is kept hidden by one of the small floating aliens known as Poulpe. He also wields a pink, diamond-shaped lapis.

Rar's 2P palette makes both his hair and eyes lime green, and his outfit is white with light olive green sections and blue trim. The laser coming from his microphone is green as well. His 2P wields a green diamond-shaped lapis.

Rars appears in the Pop'n Music Lapistoria card collection on a change card. He's shown wearing a tight black halterneck top with detached sleeves, white pants, and black boots with pink heels and rings floating around them. His real hair is shown, appearing short and messy, and a large gray alien is wrapped around his head. Several small aliens are around him, and the pink hair that he usually keeps on his hair is actually a wig, revealed to be another small alien.

In a rare card, Dooken@Invitation Party, from the Pop'n Music Lapistoria card collection, Rars wears a suit that shares the black and white colors, like a full black suit and white laces all around, especially "x's" on his pants. He has a brown doughnut brooch as a bow tie, because of the card's motif.

Costume(?) maintenance is absolutely necessary while relaxing in my room. It seems that this impression is expanding rapidly from the tour. 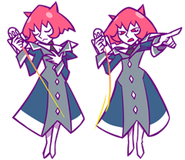 Rars' 2P palette
Add a photo to this gallery