The guy who trains early in the morning

Fate from my previous life

Pop'n Music: Usagi to Neko to Shounen no Yume

Ranma is one of the characters from Pop'n Music Lapistoria. She's a main, unlockable character as part of the PON's Fate Purification Plan (PONの運命浄化計画, PON no unmei jouka keikaku?) event. She wields a yellow, diamond-shaped lapis.

此処で会ったが百年目！
前世よりの因縁、断ち切る時が来た。
最期の雪花をその目に焼き付けて散るがいい
I've met him here for the 100th year!
The time has come to sever myself from my fate from a past life.
The snow has printed my last moments into my eyes and must go

Ranma is haunted by her past life, where she hopes to be able to settle her rivalry from then once and for all. She enjoys martial arts, being skilled with swords and likes watching Yuzuru practice, only one of the few visitors that he isn't bothered by anyone or her.

Ranma is a mysterious, pale-skinned girl with bright blue eyes and blonde hair tied in two pigtails. She dons a large, black, wide-brimmed hat that obscures most of her face with a black coat, white scarf, blue-gray pleated skirt, gray stockings, and white boots. She's shown wielding a silver katana as well. In her FEVER! and Win animation, she's seen wearing an orange and red kimono with a yellow tie around her shoulders and bandages up to her knees with sandal. Her hair is black as well.

Her 2P makes her eyes deep red and her hair blue-black, and her hat and scarf are both blue. Her skirt is red with a white coat, pale green stockings, and black boots. Her FEVER! And Win attire is change to shades of blue and white, and her hair is light gray. In her 2P her diamond lapis is red. 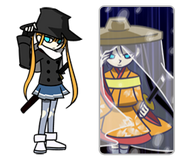 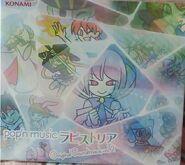 Ranma with other characters as she appears on Pop'n music Lapistoria Original Soundtrack Vol.2.