This music's selling, it is located in the place where it was implanted by making full use the current, but discontinued status' "MSX turbo(A1-GT)"'s MIDI function. My production time just doesn't take it good.
Finally for the tune, it is embedded the phrases, grasping likely the Japanese person's heart, high in place , and the visible deployment for the stole arrange & the nimble rhythm. I tried aiming.
Many people, happy playing with me with this tune.

※ Denotes chart has been revised from the corresponding AC chart:

Other charts not shown on the above table: 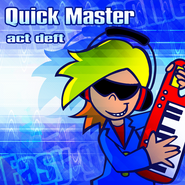