Sewing, I made a teddy bear!

Being friends with my teddy bear

Patricia, who goes by the nickname Pretty is one of the CS characters from Pop'n Music.


本物のクマさんとお友達になりたいと思っている。
I love my teddy bear,
he always comes with me wherever I go.

Pretty is a talking rabbit who was adopted by a Human Japanese family. Pretty likes nature and animals.

Pretty is a small, light pink rabbit with simple black eyes and a rectangular head. She wears a yellow dress with orange polka dots, with a white collar and frills underneath. Her boots are dark brown with lighter brown soles, and her left ear is decorated with a red flower barrette. She's often seen carrying a teddy bear.

In Pop'n Music 2, Pretty has four other palettes as well, used for the CS songs of the first game. Her 2P had beige fur with a red dress and cream colored polka dots, and her shoes were a darker brown, with her hair clip being gray.

Her 3P made her light blue and gave her a red dress and barrette, and her shoes remained dark brown while the polka dots of her dress were white. It was used for Techno'80.

Lastly, her 5P palette gave her honeydew colored fur with an orange dress with yellow dots, and purple shoes with a matching flower clip. In was used in Classic.

Her 2P palette gives her light cream colored fur once more, and the colors of her skirt and shirt are swapped. Her flower clip is blue and her boots become red.

Pretty wears a red dress with a white apron. Underneath she wears white bloomers and tights with red shoes. On her head is a small straw hat decorated with yellow flowers.

Pretty create some of Space Maco's animations in Pop'n Stage as her fairy partner.

Pretty also creates a side cameo in Hamanov's animations in Pop'n Music 10.

In Pop'n Music 12 Iroha, she only appears in Milk's Miss and Lose animations.

Pop'n Music Best Hits!:
いそがしいみんなに代わってポップンワールドにやってきたウサギさんたち。なんと5つ子！ピンク色のプリティが長女なんだよ。
A rabbit who came to Pop'n World on behalf of all the busy people. What five kids! Pink Pretty is the eldest daughter.

Pop'n Music 7:
大好きなクマのぬいぐるみとどこでもいっしょなうさぎさん。
かわいいものが大好きな夢見るお年頃なの。
This rabbit is always together with her favorite stuffed teddy bear.
She's at the age where she likes to dream of cute things. 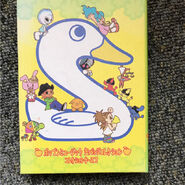