Pop'n Music (ポップンミュージック, Poppun Myuujikku?) is a 2009 Japanese music/rhythm game developed by Konami and Bemani. It is a reboot of the original Pop'n Music game, released on the Nintendo Wii. Pop'n Music was released in August 6, 2009 and on November 10, 2009 on North America. It was also released on February 2, 2010 in Europe, under the alternate title Pop'n Rhythm.

Pop'n Music has critically negative reviews, because of the absurdly different gameplay, compared to the original installments. 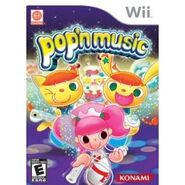 Pop'n Music Wii in US import

Retrieved from "https://popnmusic.fandom.com/wiki/Pop%27n_Music_Wii?oldid=75095"
Community content is available under CC-BY-SA unless otherwise noted.