106 (If counting both pop'n originals and Story Mode Unlocks)

Pop'n Music Lapistoria (ポップンミュージックラピストリア, Poppun Myūjikku Rapisutoria?) is a 2014 Japanese music/rhythm video game developed by Konami and Bemani, and the 22nd release of the Pop'n Music series. Its location test release dates are from February 15th and May 30th to June 1st. Its official release was on June 25th.

A parallel world dubbed as "Another World" is created by the god of Pop'n World, MZD. He then wields a magical gemstone called the "lapis", while the four main characters, Retsu, Fuga, Hiumi, and Rinka are sent to another world. In "Another World", the quartet, especially with the recruitment of Mimi and Nyami, enter an enchanted academy by encountering old and new students. They all carry their signature lapises, though a few characters share one. Throughout the story, there are a few antagonists, searching for magical lapises to engulf specific elements.

We now introduce special items called Auras. They are located in the bottom of the song banner chosen. There are six auras shown: gray, blue, green, yellow, orange, and pink. The gray Aura represents a few points, while the pink one represents as specially many (it's only used for expert, and challenging songs). If you clear a song, then you will achieve points, according to which type of aura is used. Some Auras' bits are used for some Normas or options.

Pop'n Challenge occurs, in order for the player to complete challenges. If a challenge is accomplished, the player will receive some prizes, such as item gets, characters, new songs, etc.

See List of Story Arcs.
You only choose one story, before a cutscene appears. If the Story Mode's gauge is full, you will encounter another cutscene. If a secret song is chosen, you will receive a cutscene before playing the song. The song will be available, after you have completed it.

The new Course Mode is extremely analogous to the defunct Expert Mode. Open and close the folder with the green button. Unlike Expert Mode, there are four trophies for ranking. You will receive a gold trophy, if you clear a song without any MISS. Both the gold and silver trophies will be earned when NORMA is used. The bronze is only used for clearing, while the stone trophy represents that you've failed the course. 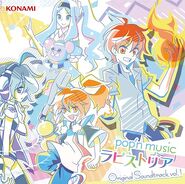 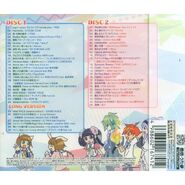 Mimi and Nyami holding hands in the promotional video